The Science Behind Cheese with Decimal Place Farm - Science ATL 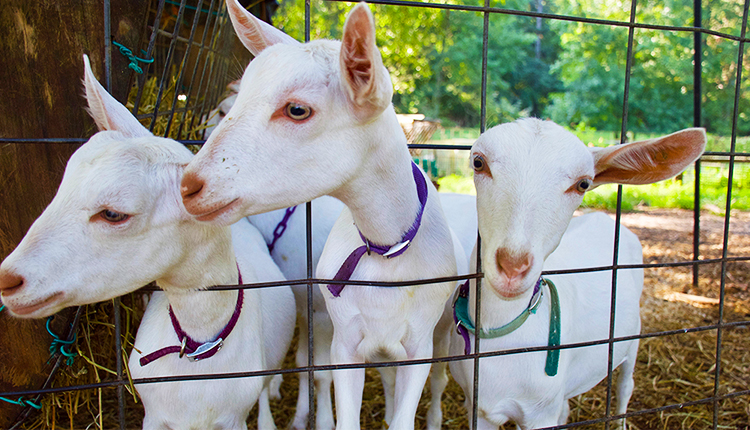 You might not expect it, but nestled just southeast of the city limits of Atlanta lies a 40-acre oasis of grazing pastures and scrubby brush that 40 adorable adult dairy goats call home. Those in the know will tell you it’s where to find the best goat cheese in town — Decimal Place Farm. A mere 11-minute drive from the Starlight Drive-In Theatre, Decimal Place thrives as a source of freshly made cheeses, delivering feta, mozzarella, creamy chevre, and cheddar to grocery stores, farmers markets, and well-known restaurants around Atlanta.

Mary Rigdon has been running the farm since her family took over the land in 1995, and is a tried-and-true expert of her craft. With a degree in animal science and background in research with pigs, sheep, and cattle, she’s incredibly knowledgeable when it comes to animals. And it shows – she’s raised her herd of Saanen dairy goats since they were little, and they are noticeably trusting and calm in her presence. 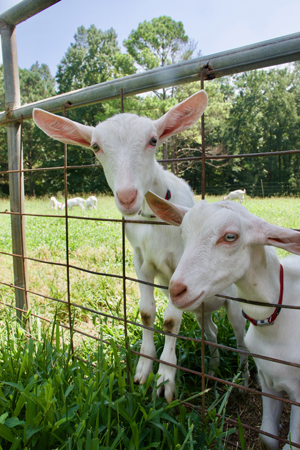 “We’re truly all about keeping the animals happy and healthy,” she says. “I love the animals. The better I treat them, and the better I understand them, the better they give back to me.”

Her almost otherworldly intuition puts her goats at ease, and they find comfort in the routine she’s established for them. “Goats are all about routine,” she says. “So, twice a day, at the same time every day – we milk.”

Mary fell in love with Saanen goats – a breed originating from the Saan valley in Switzerland — for their sweet temperaments and superior milking qualities. Over the years, she’s carefully bred and selected her goats for their impressive milk production, as well as their physical characteristics.

“Each animal is identified as to who their mother is and their father is, and I’ve got milk records on the mothers for the last 20 years,” she explains. “I’ve selected all through those years for straight legs, a level top-line, and good feet — so that they can travel through my pastures and do a good job of grazing, which is what they’re meant to do.”

Most days, you can find the goats happily roaming and grazing around the 40 acres of farmland, rotation of which Mary strategically orchestrates to keep both the land and goats healthy.

“They graze the woods that are around us,” she says. “We have poison ivy, privet, honeysuckle, and the goats eat that, along with the tree leaves and the acorns that are around, and they turn it into that tasty milk.”

When baby goats are born, the mother starts giving milk – called lactation – and generally, each goat gives milk for approximately 300 days. The goats at Decimal Place Farm usually give about a gallon a day, if not two, for those 300 days, and Mary and her crew turn it into cheese.

Mary isn’t shy about diving into the science behind it all, either — from the selective breeding to optimization of milk production, to the science behind different kinds of cheeses. Her enthusiasm is palpable as she explains lactation, sketching a curve on the notepad in the milking room.

With a twinkle in her eye, she says, “I eat this [science] stuff up. I love it!”

She explains that, after extensive calculations and cross-referencing of milk records, she’s selected for goats that maintain a long, level lactation curve, rather than a large, brief spike in milk production.

It All Begins With Milk

The process of making cheese starts in the milking room. Mary’s milking room facility accommodates up to ten goats at a time, each of which gets personal attention to ensure they’re in tip-top shape before beginning. Not only are the goats tested in advance for tuberculosis, brucellosis, and other diseases, but their milk undergoes a quick, simple test that confirms each goat is in good health and thus producing healthy milk each day.

Once the goats’ udders are dipped with a bleach solution and wiped clean, and their milk is deemed infection-free, the milking process begins – either by hand or by a vacuum-driven machine that mimics the action of a squeezing hand, gently pumping the milk to a receiver. When the receiver fills up with milk, the milk completes an electrical circuit, activating a pump that transfers the milk up and through the wall to a bulk tank.

The milk stays chilled in the bulk tank until Mary’s ready to make the cheese, which is typically the same day the goats are milked. Each day is different, with local chefs and restaurants requesting a variety of cheeses in different quantities. Mary makes sure she’s ready for anything.

Each batch of milk is first pasteurized – heated above 146 degrees Fahrenheit for 30 minutes – in order to kill any harmful bacteria, then cooled back down. From there, small batches of milk are processed at a time, undergoing slightly different processes to achieve the desired consistency and taste.

The Transformation From Milk to Cheese

In each case, the basic concept is this: milk exists as an emulsion, meaning that microscopic clumps of milkfat proteins are suspended in a mostly watery environment. At the heart of cheese-making is simply removing the water from milk, concentrating the proteins and fats that are already there into solid curds. 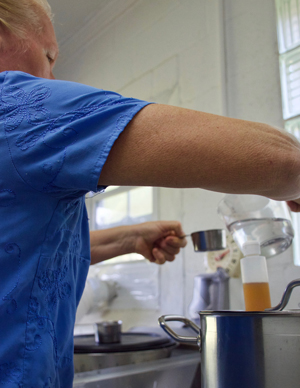 To begin the process, Mary adds a starter culture of mesophilic (or medium heat-loving) bacteria, which helps “ripen” the milk, converting milk sugar to lactic acid. This helpful bacteria culture helps the good bacteria in the milk flourish and ultimately makes the chemical conditions just right to develop the desired flavor and texture of the cheese.

Mary explains that milk contains two types of proteins: casein and whey. Casein proteins have little tails that form a protective surface, preventing the molecules from clumping together. During the process of cheese-making, Mary adds an enzyme called rennet, which slices those little tails off the casein proteins. As a result, the casein proteins begin to lump together – called clotting or coagulation, which sets off a domino-like effect until nearly all of the molecules have clumped together. The milk is converted to a solid – called a curd – and the remaining liquid portion (called whey) is separated.

You can make any kind of cheese with the goat milk, Mary explains: but it’s the temperature, the time, and the amount of good bacteria and rennet you add to the milk that makes the difference. For instance, to make Decimal Place Farm’s signature creamy chevre, Mary adds her culture of good bacteria to a pot of milk with just 5 drops of rennet – a little bit goes a long way with that stuff. Compared to other cheeses, creamy chevre requires more culture, less rennet, a lower temperature, and a much longer incubation time.

She explains that she makes feta cheese using a larger amount of rennet, a much shorter incubation time, and a higher temperature, so the bacteria grow more quickly. Over the years, she’s developed a precise protocol for each type of cheese, giving each type a signature flavor that keeps folks coming back for more. 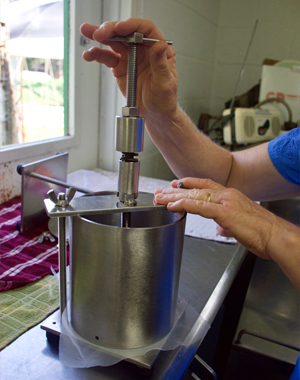 Once separated into curds, each type of cheese undergoes a slightly different process to achieve the proper amount of moisture. Most undergo a combination of pressing, scooping, straining, slicing, and salting, the protocol varying a bit for each. Creamy chevre has the highest moisture content of all the cheeses, while cheddar – which requires a few extra steps – has a much lower moisture content, and can keep much longer as a result.

“Making cheddar is a long, involved process,” Mary explains, as she twists the handle of a cheddar press, mechanically pressing the cheese to remove excess moisture.

When she’s not tending to goats or making tasty cheeses, Mary shares her love of science through her passion for teaching. She regularly leads tours and classes on the farm to curious folks of all ages, guiding groups through pastures and leading cheese-making demonstrations.

Her enthusiasm is infectious as she describes why some cheeses are yellow, while others are white: cows transfer carotenoids (a natural pigment found in grass) from their diet to the milk, where they bind to the fat and end up in the curds. Goats, however, (along with sheep) do not pass carotenoids to their milk, so their milk is white. 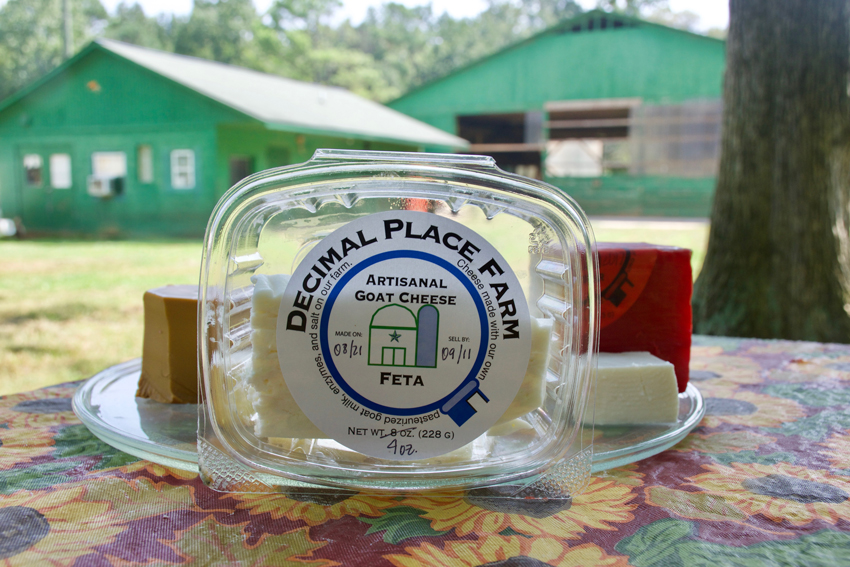 Her extensive knowledge comes in handy, especially when she encounters folks with allergies or intolerances to cow’s milk.

The Science Behind Beer with Orpheus Brewing & Georgia State University

The Science of Spirits with Old Fourth Distillery
Scroll to top