The Science of Spirits with Old Fourth Distillery - Science ATL 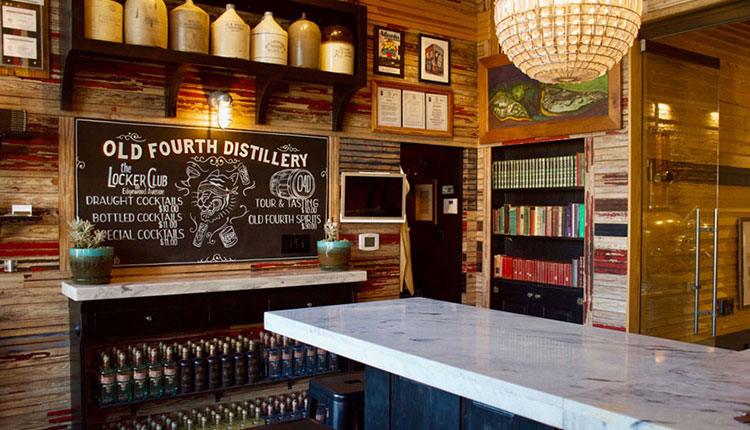 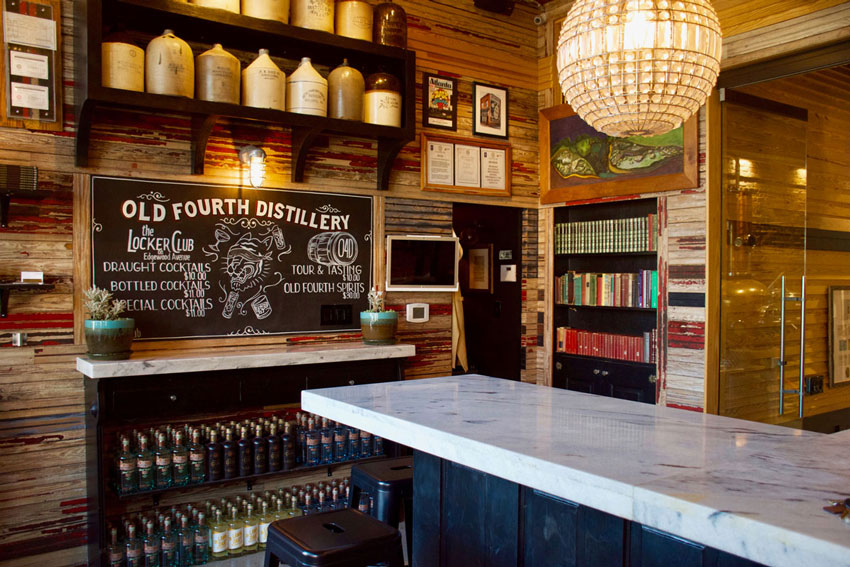 Old Fourth Distillery, nestled in the heart of Old Fourth Ward, is well known around Atlanta as a purveyor of hand-made vodka, gin, and their signature ginger lemon liqueur, Lawn Dart.

It hasn’t always been easy to get locally sourced spirits, though. In fact, Old Fourth is the first legal Atlanta distillery in over 100 years, due to the temperance movement that forced prolific distillers like R.M. Rose & Company out of the city. 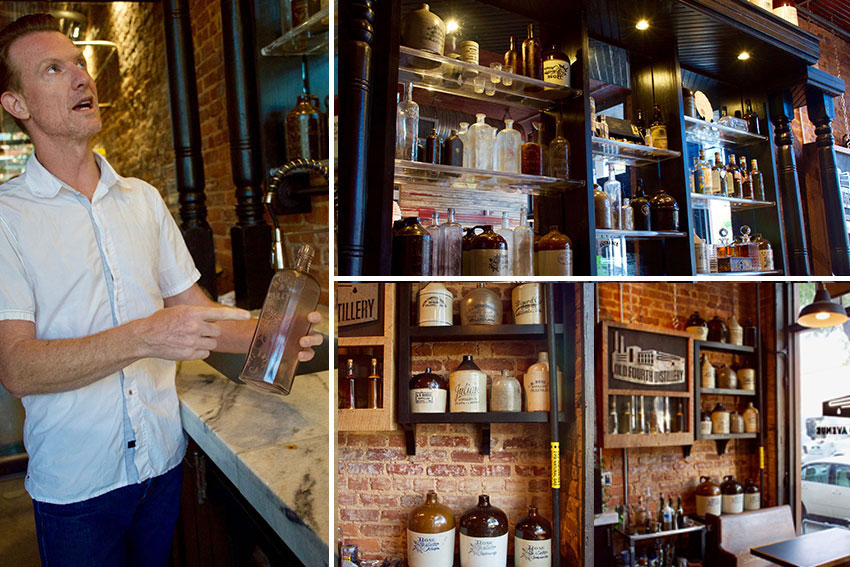 “There’s a really rich history of distilling in Atlanta,” says Jeff Moore, one of the two founding brothers of O4D. If you look closely, you’ll notice that the distillery is teeming with artifacts of the distillers that came before them – some bought, others donated by generous collectors and enthusiasts.

The Moore brothers have a refreshing reverence for history, honoring the folks that pioneered their craft in all they do. Each aspect of the distillery – from the construction of the physical space, the antiques filling each nook and cranny, the design of their bottles and labels, and the spirits they create — has been thoughtfully considered. Each bit is a nod to history, an appreciation of the past. 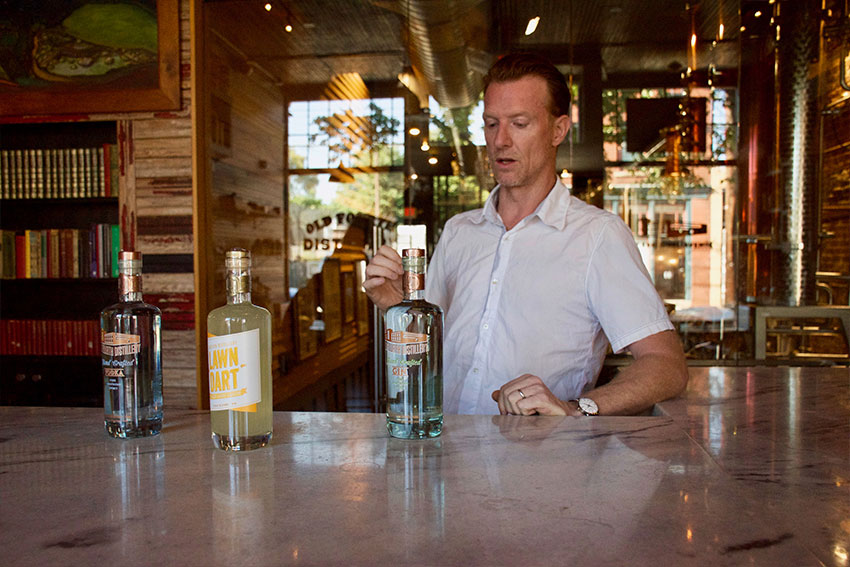 For instance, many of the materials used to build the space were salvaged and repurposed from the demolition of John B. Gordon Elementary School, a historic, once bustling East Atlanta school built in the early 1900s. The distillery’s marble countertops once served as dividers of the school’s boys’ and girls’ bathroom stalls, and is said to have come from the same batch of marble — mined in Tate, Georgia at the turn of the century — that the Lincoln Memorial is made of.

Jeff acknowledges that although it takes significant work to upcycle old materials in place of buying new ones, it’s worth it.

“We talk about being stewards of the materials that we use,” he says.

The Journey from Yeast to Spirits 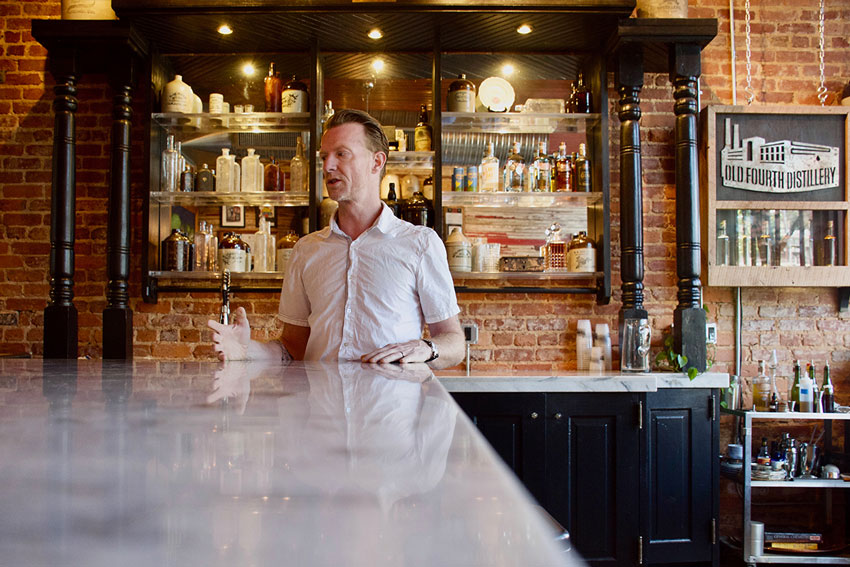 The Moore brothers’ thoughtfulness extends to the science behind their craft, too, and necessarily so – creating spirits is actually more complicated than you might think.

At its core, distillation is the process of strategically separating liquids through condensation (which means converting water vapor into liquid water) and evaporation (converting liquid to a gas). But to make gin, vodka, or bourbon, for that matter, it all begins with yeast.

Similar to wine- or beer-making, creating liquor begins with fermentation, or the conversion of sugar to alcohol and carbon dioxide. At O4D, they’ve developed a specific protocol for each type of liquor they make, each requiring a particular strain and precise amount of yeast. 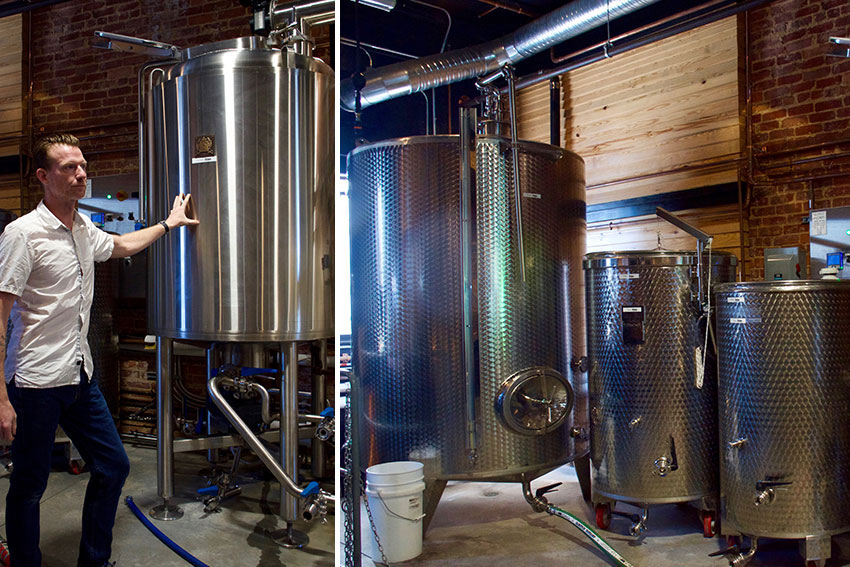 “We could take the exact same recipe that we made our vodka out of and put another yeast strain in and it’ll give us a completely different finish,” says Jeff. “It’s really, really interesting, how the complexities work.”

As such, each batch of yeast must be fed and grown precisely. When making vodka, for instance, Jeff and his team add carefully measured amounts of cane sugar, nutrients, calcium carbonate (to balance the pH), and a few other ingredients to their yeast, and then grow the cultures at specific controlled temperatures. 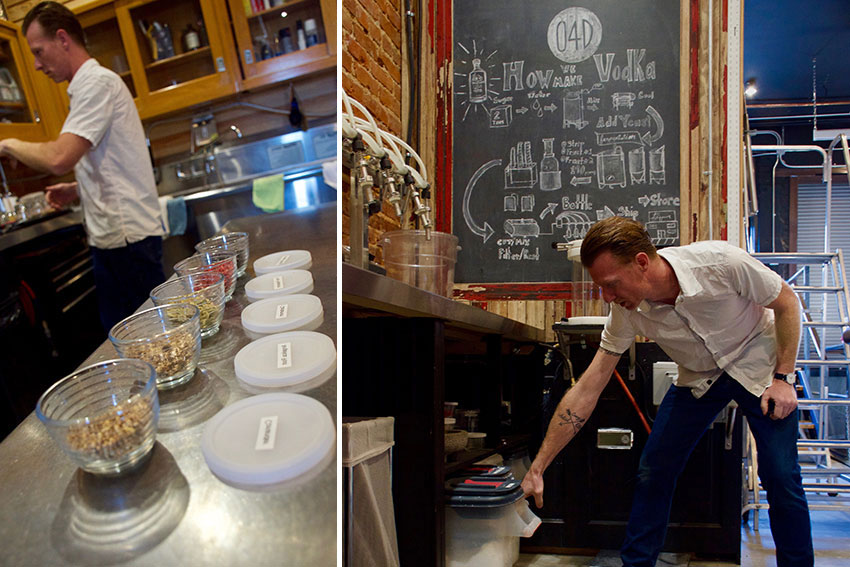 The yeast undergo multiple cycles of heating and cooling over the next five days, coordinated by human-powered thermostats and control valves galore. As the yeast convert sugar into alcohol, they eventually run out of sugar to consume and ultimately create a 13% alcohol mixture.

“We call it Edgewood hard soda,” Jeff jokes. “It’s [basically] 13% alcohol cane soda, if you will. But we don’t stop there.”

The thing is, yeast don’t like living long-term in 13% alcohol. It’s toxic to them.

That’s where distilling comes in. To get to that higher alcohol content, Jeff and his crew must physically separate the alcohol from the rest of the mixture.

Basically, since the boiling point of alcohol is lower than water, distillers can strategically evaporate the alcohol from their mixture. The next step is to collect the vapors, separate them from the water, and cool them down, thus condensing the vapor back into a liquid. This is all done in a device called a still. At O4D, they use a custom, handmade CARL copper still.

It seems like magic, but it’s science: in a single run, the 13% alcohol mixture becomes 50% alcohol. Jeff and his crew then run the mixture twice more through their still.

For each and every run, the still operators keep detailed logs, tracking which batch of sugar they used, how much of each ingredient they used, any time or temperature tweaks they made throughout the process, and characteristics of the final product.

The evaporation process of distilling isn’t completely clear-cut – the alcohol you want is inevitably mixed in with some chemicals you don’t want. Jeff explains that with careful temperature and timing control, he can separate out the parts they don’t want and keep the parts they do.

“We’re pulling off three main components [at different temperatures],” Jeff explains. “The heads, the hearts, and the tails. What you want to drink are hearts.” 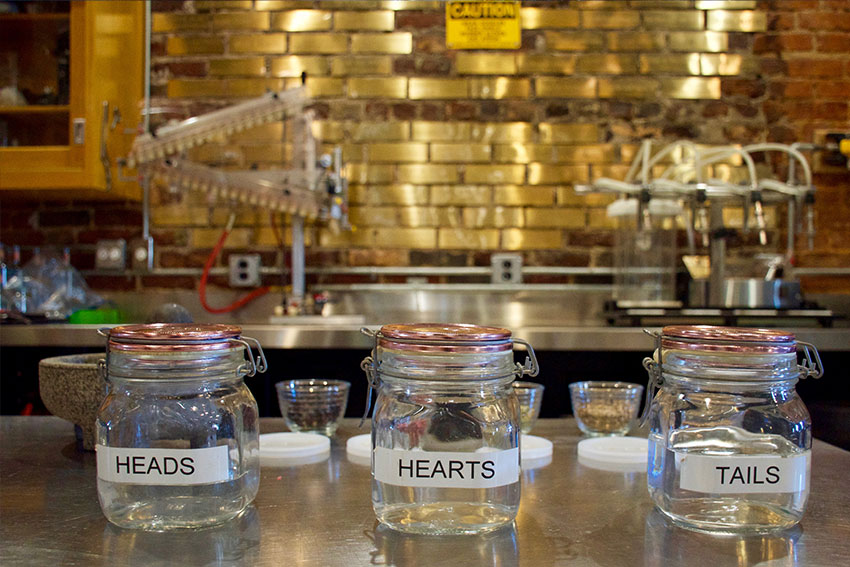 “You’re always going to have some heads and some tails. Always. There’s no getting rid of it all.” Jeff continues, “How you tell is by taste, touch, and smell.” 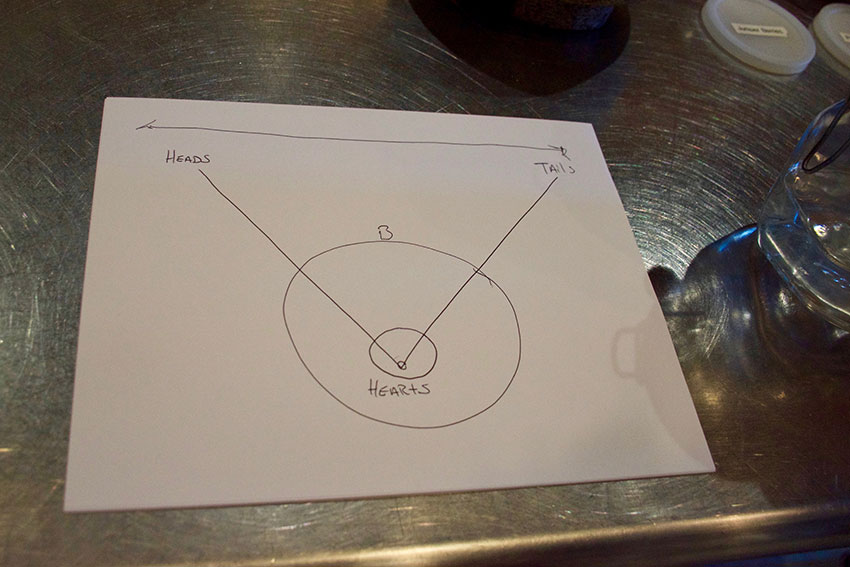 As with most things, it’s all about finding balance. The optimal middle portion — the hearts — undergoes a few more finishing steps before it’s ready to be bottled, including a sometimes week-long “resting” phase to let everything settle.

Jeff gestures to the hearts as he says, “when we’re distilling, this is the magic. It all boils down to this.” 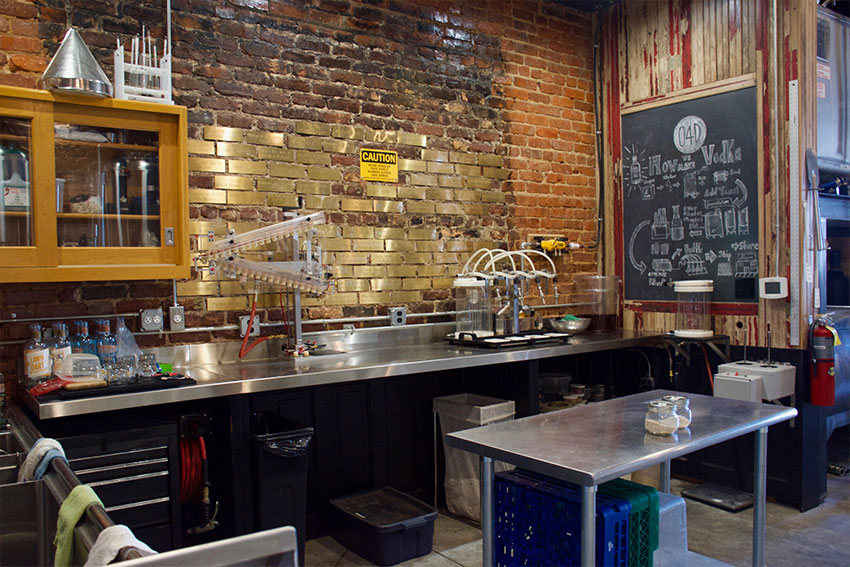 When it comes to making spirits, there’s both an art and a science to it. Vodka, gin, and bourbon require very different starting materials, temperatures, time schedules, and manipulations along the way. No two gins are exactly the same, either. 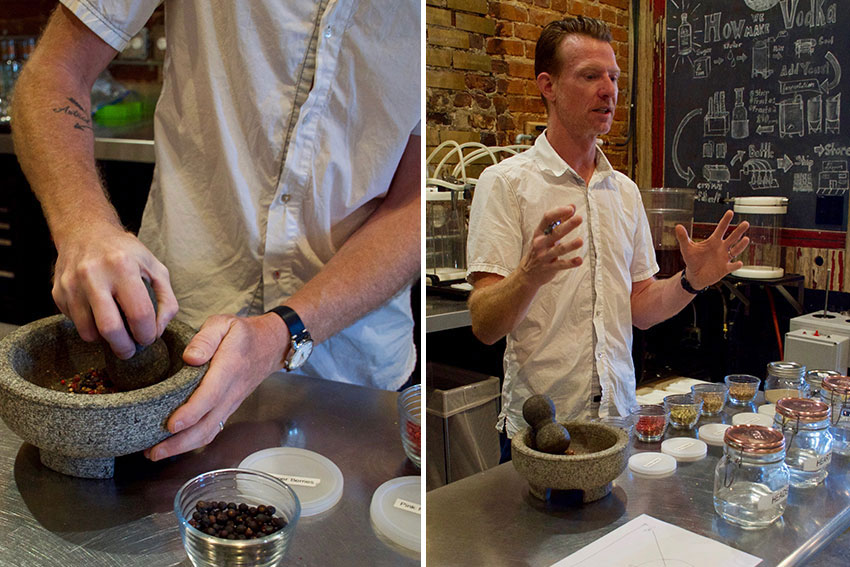 “Gin can have literally anything in it. The only thing that gin has to have in it from a legal standpoint is juniper berries,” Jeff says. “Other than that, the sky is the limit. And believe me, we have tested that theory.” 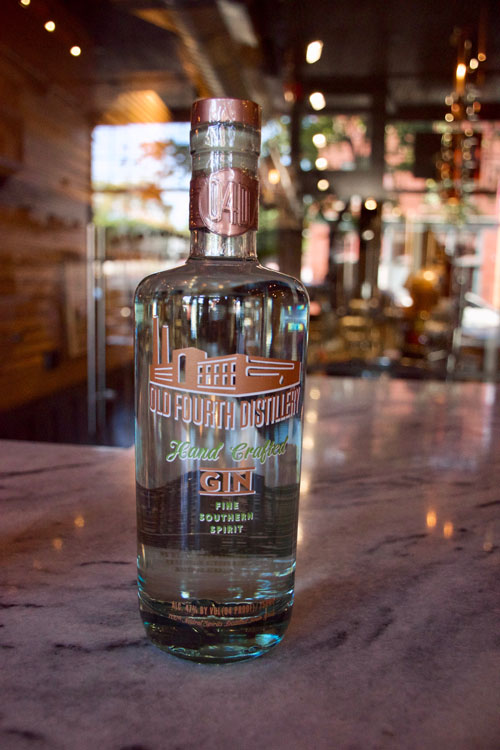 On those long days spent waiting for those heads, hearts, and tails to come off the still, Jeff and his colleagues fill the idle time with experiments on a smaller 20-liter still. They play around with different ingredients, temperatures, and flavors, always chasing their curiosities and, ultimately, enhancing their craft.

“The gin that we sell today is my greatest accomplishment in terms of distilling,” Jeff says. He gestures to a shelf filled with bottles. “Up here, we have about a dozen versions of gin.” He continues, “I’ve got a moleskine notebook stashed somewhere and every single one of these has got three pages of notes on how to make it.”

Since Old Fourth Distillery opened its doors in 2014, they’ve made an effort to connect with their community through tours, tastings, and community collaborations. This summer, for instance, they teamed up with Atlanta United to create a limited edition gin that has been enthusiastically received by fans.

Old Fourth finds other ways to give back as well, like maintaining the gravesite of historic distiller R.M. Rose, which is nearby at Oakland Cemetery. They’ve made gin in Rose’s honor, using juniper berries picked near his gravesite. O4D has also forged a friendship with their upstairs neighbor, The Railroad Model Club of Atlanta, periodically helping them with upgrades and generally supporting their endeavors.

With so much intention and precision behind all they do, O4D is poised to serve southern spirits to Atlanta for years to come. To keep up with new releases and updates or to schedule a tour, visit the O4D website. You can also connect with them via Facebook or Twitter.

If you’re curious about the history of distilling in Atlanta, Jeff recommends the book Prohibition in Atlanta by Ron Smith and Mary O. Boyle.

The Science Behind Beer with Orpheus Brewing & Georgia State University