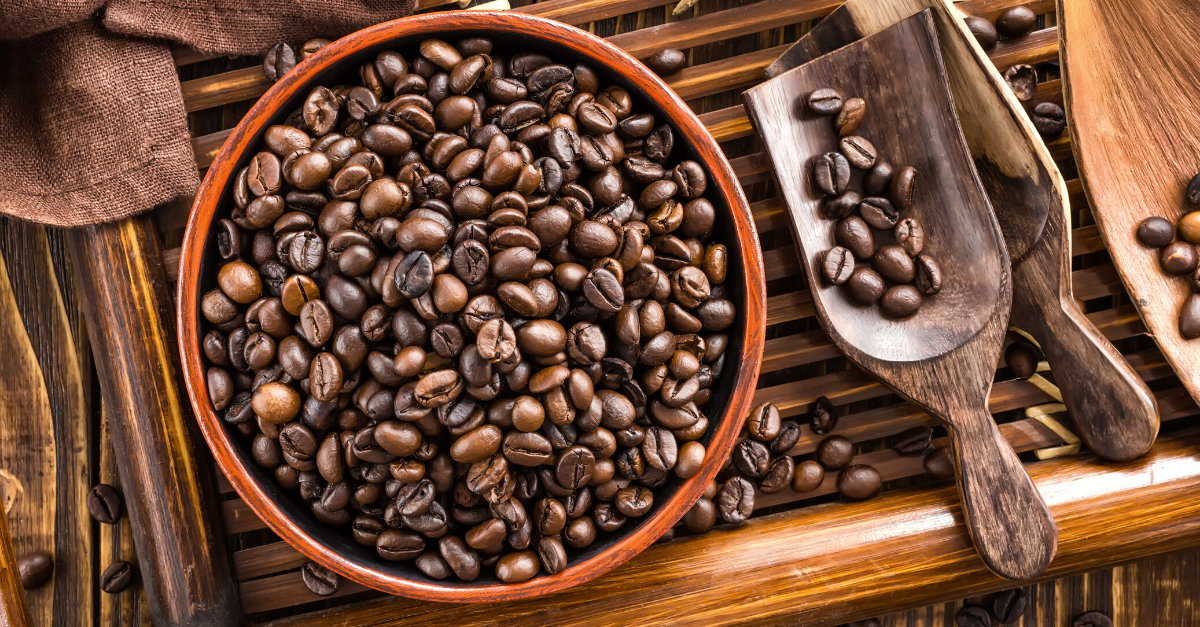 During the summer of 2017, Kayla Bellman was working with Habitat for Humanity delivering latrines, smokeless stoves, and water filters to families living in extreme poverty in a remote region of Guatemala. This particular region, along with many other rural, agrarian areas of Guatemala, had a local economy largely pillared on coffee production. It was during this summer that her team hired a mason, Luis. To make ends meet, Luis worked for Habitat for Humanity and on a nearby coffee farm as a picker. Kayla soon realized that, despite having two jobs, Luis and his family were still living well below the poverty line.

How could such a large, profitable industry, like the coffee industry, leave its laborers and producers so vulnerable? 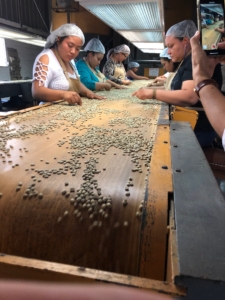 Workers at a milling and processing station in El Salvador

As Kayla continued her work with Habitat that summer, she noticed a pattern: “Most of the families that qualified for Habitat assistance had one or more family members employed as manual labor on local coffee farms. These people had full-time, legitimate employment, and yet they were still living on one dollar a day.” How could such a large, profitable industry, like the coffee industry, leave its laborers and producers so vulnerable? The dots Kayla connected that summer pointed her towards glaring gaps and severe inequities in the coffee value chain and set her on a path not only towards a more mindful consumption of that product but ultimately to a career in development.

It is a little too late in the day for coffee, so I sit with Kayla Bellman and her colleague Aelish Brown over craft beers at the Bookhouse Pub in Atlanta to discuss the fundamentals of coffee production, the coffee value chain and finance sector, and fair trade, among other topics. Kayla is a current student in the Masters in Development Practice program at Emory University and a project intern at Transparent Trade Coffee (TTC), a program at Emory University’s Social Enterprise at Goizueta Center (SEG). Aelish Brown is a program associate at SEG.

As I am a coffee novice in all senses of the word, I ask them to start at the beginning: How does coffee travel from a distant farm in a foreign country into the filter used for my morning drip? Aelish patiently explains this process, known as “bean to cup.”

Where does coffee come from?

Coffee is grown on trees (genus Coffea) with beautiful white flowers in tropical climates, typically in Latin American, Asian, or African countries. These white flowers produce cherry-like fruits that change color from green to red and are harvested once a year over an approximately three-month period. Inside the skin of these red cherries are several hard seeds, which will become coffee beans. Farms hire local, seasonal labor to handpick the red cherries to procure the seeds inside. If the farm is in an area with access to adequate supplies of water, the seeds undergo a “wet process” in which they are fermented in tanks of water for 24 hours to remove the excess pulp from the fruit and then dried. 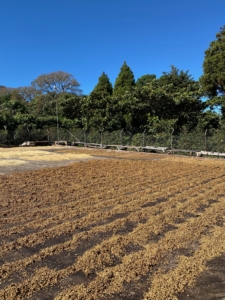 Drying patio at a milling and processing station near Ataco, El Salvador

However, if water is scarce, farms opt for a “dry process” in which seeds are placed on giant patties to dry in the sun, and then the excess fruit is removed. Once the seeds undergo one of these processes, the resulting beans, often referred to as “green coffee,” are sorted by size, graded for quality, and bagged for sale. Individual farms or cooperatives (groups of farms investing in equipment and labor together) then sell these bags to an exporter. Exporters are based out of producing countries. They typically coordinate with importers in consuming countries in the global north (United States, Europe, etc.) to move the green coffee via cargo ships. Importers and exporters coordinate putting this haul in warehouses and listing the types of coffee.

The actual roasting of green coffee takes place in importing countries. The beans are placed in roasting machines and transform into the brown beans we know, love, and purchase in stores.  At this point, a roaster will go to the warehouse, select and buy coffee, and move it to stores and coffee shops where it is ready for consumption. (For a video of the process, here’s NPR’s Bean to Cup.)

The fundamentals of coffee production

The coffee ecosystem includes the labor of farmers and their employees, as well as importers, exporters, roasters, and consumers.  Also swirling around this delicate ecosystem is the finance sector and something called the C price. “Coffee is treated as a commodity by the New York Stock exchange. The trading price of a green pound of coffee is known as the ‘C price,’ and this figure ultimately affects the price of coffee,” Aelish describes. Like other commodities, the law of supply and demand determines the C price. For example, if there is coffee scarcity, the price will go up until consumers stop buying it because it is too high. If there is an abundance of coffee, the price will drop.

The average production cost of coffee ranges anywhere from $1.05 to $1.40 per pound. 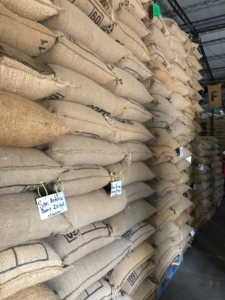 According to Caravela, the average production cost of coffee ranges anywhere from $1.05 to $1.40 per pound. With recent booms in coffee production, the C price has dipped as low as one dollar per pound, leaving coffee farmers in the red. Furthermore, considering that the majority of cost around coffee production is labor, farmworkers like Luis often withstand the worst of this deficit.  And it is in this way that the cycle of poverty remains at the farm level, and profits stay in the hands of large companies.

Third-party certifications of coffee products were born to attempt to fix this problem and to assure consumers the product was harvested under both eco-friendly and economically fair conditions; the most well known of these certifications is “fair trade.” Fair trade guarantees a minimum price for commodities (like coffee) to ensure that laborers in producing countries are paid a just wage. When the C price falls, they are still paid the agreed-upon minimum price for their product. In theory, this minimum price creates a safety net for farmers.

However, if the C price happens to take an upswing, under fair trade rules, coffee growers are paid the same fair-trade price (even if the C price exceeds this price). Or as Aelish put it, “When you create a floor, people will sit on it.” Basically, fair trade ensures that farmers do not lose when coffee prices fall, but they do not gain when the prices climb either. In this scenario, again, the benefits and profits often fall into the hands of large companies.

Many experts in the coffee industry argue that a blanket minimum price is not the solution. Instead, prices need to be based on the real cost of production, which varies by country, and emphasis needs to be placed on transparency along the entire value chain. This is where new buying models and social enterprises like TTC enter the picture.

TTC is one of a number of organizations spearheading a direct-trade approach to the coffee industry. Essentially, direct-trade approaches cut out the middlemen. Small coffee farmers sell directly to buyers and are often paid substantially more in the process. TTC has compiled a list of “Transparently Traded Coffees” that allows consumers to see the effective return to origin, or the percentage of a coffee retail sale that goes back to farm, for each brand of coffee. This information allows consumers to know exactly how much a farmer was paid for his/her product and make their own informed choices about which coffees to buy (Transparent Trade Coffees).

In the end, the ultimate goal of third-party certifications and direct-trade approaches is to get money out of the hands of big corporations and back into the hands of small farm owners and their laborers, allowing people like Luis to provide for their families and lift themselves out of poverty.

Think before you drink

As we finished our beers and our conversation, Aelish Brown made her final call to action: “We all have that one thing we care about: maybe it’s coffee, maybe it’s clothing, maybe it’s this craft beer we’re drinking. Whatever it is, I hope that learning about the value chain of coffee and thinking about where it comes from has incentivized you to care OR at least think more critically about other products. Even if I haven’t reframed the way you think specifically about coffee, even if you don’t practice it day-to-day, I hope you can take this logic and thoughtfulness and apply it to that one thing you care about.”

Thank you to Kayla Bellman and Aelish Brown for teaching us about the incredible science of coffee production! Check out Transparent Trade Coffee for direct-trade coffee that helps support small farmers. 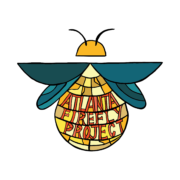 Speaker Series: Learning from the Fireflies in our Backyards 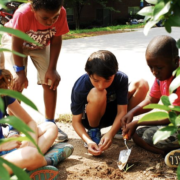 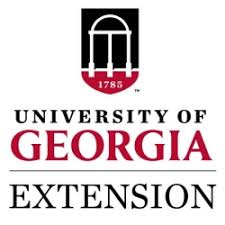 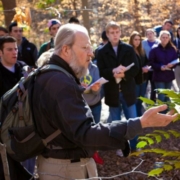 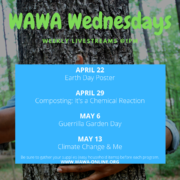 Workshop: Let your Forest be your Food

How Ink Evolved: The History and Science of Tattoos
Scroll to top