Science Is For Everyone - Science ATL 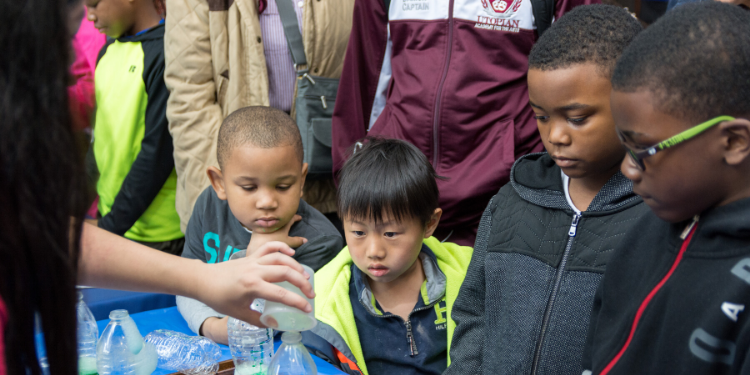 At Science ATL, we believe that science is for everyone.

These past few weeks have highlighted how the American perception of “everyone” often does not include Black Americans, whose voices and lives are devalued time and again. The scientific community is part of the problem of systemic racism in our country, yet there are groups who are actively working to make change. These organizations are striving to improve access to science learning opportunities, increase representation amongst scientific leaders, and reduce barriers that prevent people from feeling science can be for them.

The scientific community is part of the problem of systemic racism in our country, yet there are groups who are actively working to make change.

The Arthur M. Blank Family Foundation – With a focus on Black neighborhoods on the Westside, the Blank Foundation is making change by providing resources and helping to build community. We are grateful to their support for our Georgia Chief Science Officer program where we are empowering youth to lead STEM education and community change efforts.

Brown Toy Box – A local company spearheaded by the awesome Terri-Nichelle Bradley that works to make science, technology, engineering, arts & math (STEAM) accessible, representative and fun for Black children. We are proud to partner with Terri on a project funded by the United Way to provide her STEAM kits and Science ATL passports to hundreds of underserved elementary students this summer. You can also find her kits for sale on the Brown Toy Box website.

re:imagine/ATL – With a focus on diversity, inclusion, and storytelling, re:imagine/ATL trains, equips and inspires young people to build careers in the creative and digital media industries.

Science Creations – With a focus on hands-on learning, Science Creations works to bring science to life with science shows and STEAM kits. The team has done a lot of work in low-income communities, reducing barriers to science by making workshops and shows affordable for all.

Science for Georgia – Science for Georgia was birthed out of the March for Science, and since then, the team has united scientists around the state who communicate and celebrate the ways science can help solve many of our state and world’s most significant problems by breaking down barriers that distance many people from feeling part of the scientific community. Their Science Tales & Trails program focuses on highlighting disparities in environmental justice.

STEM Gems – Rockstar engineer and author Stephanie Espy has made it her mission to show young women that the STEM fields aren’t just for men. Through her book, camp, academic coaching and more, she has worked hard to provide better representation and role models. We’re proud to have had a STEM Gem event at nearly every Atlanta Science Festival.

The Story Collider – This live show and podcast dedicated to sharing true, personal stories about science has been at every Atlanta Science Festival since our first one in 2014. Since then, Atlanta has been lucky enough to be one of the cities hosting regular shows throughout the year. The Story Collider has a mission to collect stories from as many different voices as possible, including stories of Black science, joy and life. Find playlists of these stories here.

The Village Tutorial – A recipient of one of our mini-grants to develop Festival programming, the Village Tutorial aims to remediate and enrich the talents of children from diverse backgrounds through the creation of global awareness and respect for diverse cultures and people.

West Atlanta Watershed Alliance – This community based non-profit uses the glory of nature and working to protect, preserve and restore it to improve the quality of life for Black neighborhoods in Northwest and Southwest Atlanta. WAWA has partnered with Science ATL annually for an incredible outdoor STEAM event annually at the Atlanta Science Festival.

500 Women Scientists – This national grassroots organization has a pod here in Atlanta whom we’ve partnered with for Atlanta Science Festival events. Their mission is to make science more open, inclusive, and accessible, and transform society by fighting racism, patriarchy, and oppressive societal norms. See resources on their website for scientists supporting the Black Lives Matter movement.

United Way of Greater Atlanta – With their support for our Georgia Chief Science Officer program and helping us send Science ATL Passports to low-income families, United Way of Greater Atlanta is serving communities in Atlanta that need it most. The charity’s work in tracking child well-being data and working to improve that across the city is making a huge difference for Black residents in the city.

YMCA of Metro Atlanta – We are proud to be a partner of this organization that works to meet the most critical needs of our communities everyday but especially in times of crisis. Not only have we worked with the YMCA team to produce Festival events, we also partnered with them to distribute several hundred of our Science ATL Passports to help provide out of school science learning to underserved communities when the coronavirus crisis struck.

The Awesome Science of Coffee Production
Scroll to top