The Science Behind the Circus with Imperial OPA - Science ATL 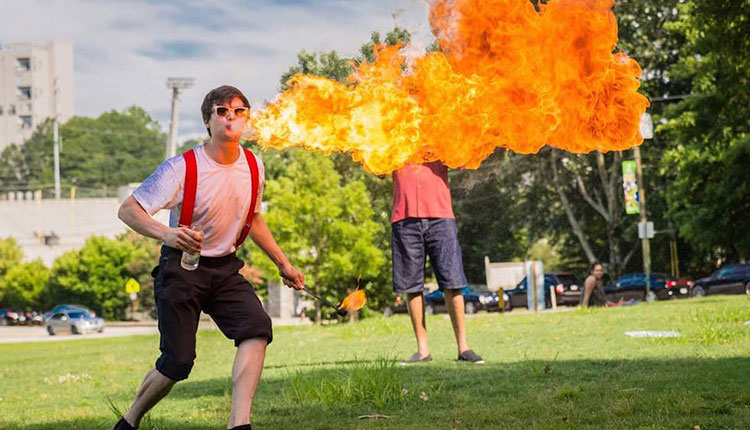 How do circus performers balance a ladder on their chin? How does inertia affect aerial shows? The science behind the circus is both intriguing and entertaining, so we’ve turned to Imperial Opa member John Indergaard to help us learn a bit more.​ 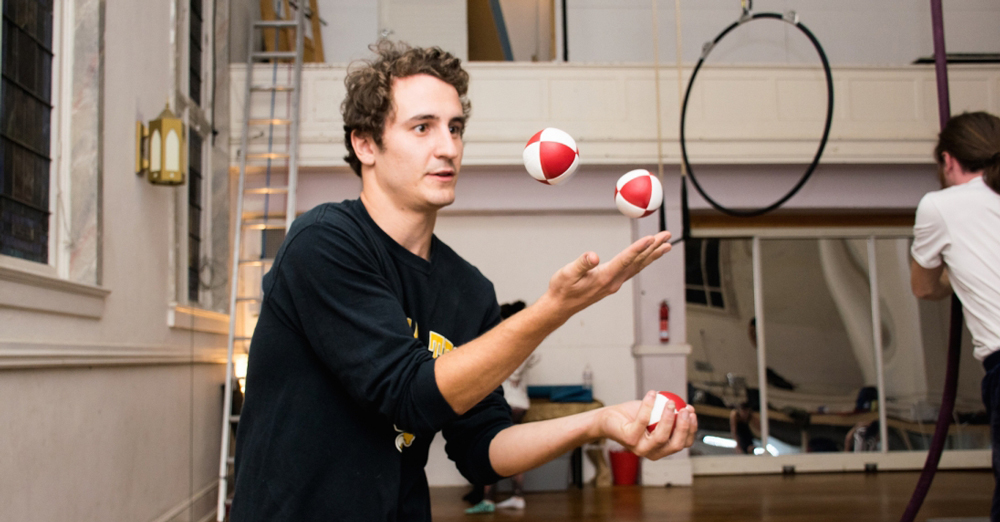 John, a self-described “general goofy person,” began juggling at seven-years-old in P.E. class and turned the skill into one of his favorite hobbies after his mom bought him juggling clubs for his birthday.
John’s introduction to the circus actually happened thanks to the Atlanta Science Festival. John was studying physics with a research focus on molecular beams at Georgia Tech. While hanging out in the demo room of the Howey Physics building one day, John and a friend gave a tour to a professor who wanted to create a “science of the circus” event for the upcoming Atlanta Science Festival. Naturally, John’s ears perked at the chance to incorporate his favorite hobby and his passion for math and science. Since then, John joined the circus and has become the science expert at Imperial Opa, leading our annual Science of the Circus event each year at the Festival. We hung out one night at circus practice with John to learn more about how he intertwines his two passions at one of Atlanta’s best circus acts in town.

What areas of science are involved in circus performance?

Every circus act can be viewed through the eyes of a scientist. Scientific thought can be used to analyze anything in nature, so I would say that I dissect circus feats through scientific scrutiny more than develop acts based off of scientific principles. 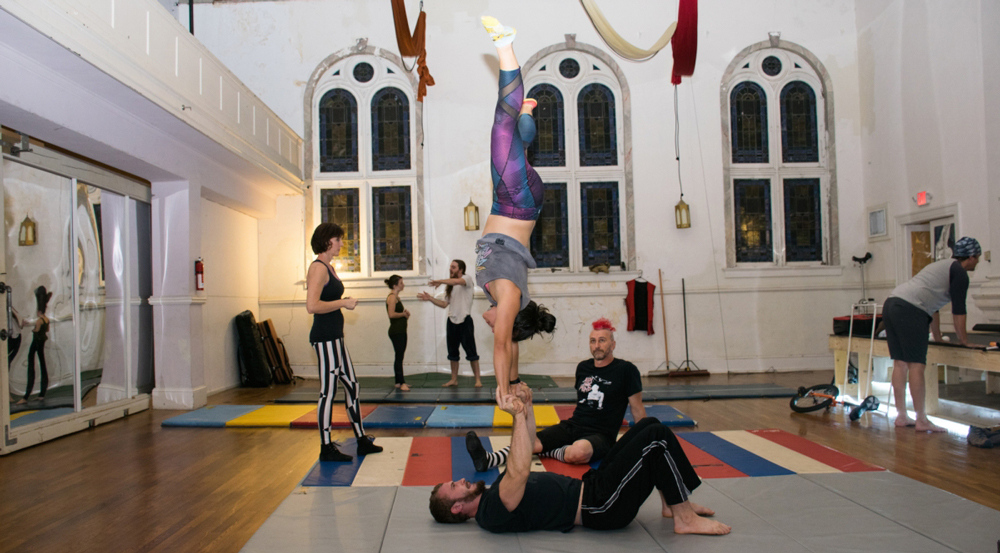 Partner acrobats take hours of practice and teamwork! The scientific trick to these poses comes in analyzing the center of mass, since there can be several acrobats at a time leaning away from each other.

Tell us more about how you use science to perfect your craft.

The great thing about using the circus as an avenue of science outreach is the ubiquity of circus arts in the world and the large degree of separation between circus and science. When people think of circus they probably don’t think of science at all, and vice versa. When an audience, particularly younger students, are presented with an amazing circus act that is given a detailed scientific description it brings up a conflict in their minds: How is this person making the circus about science? What does science have to do with anything here? I try to use these moments to help people realize that science was not created for the classroom or made to be a boring homework assignment, but rather science has been cultivated for thousands of years to give us the most useful and detailed methods to learn something from the world around us – whether that be atomic physics, chemical reactions, or an acrobat on the trapeze! Science can be everywhere around us! 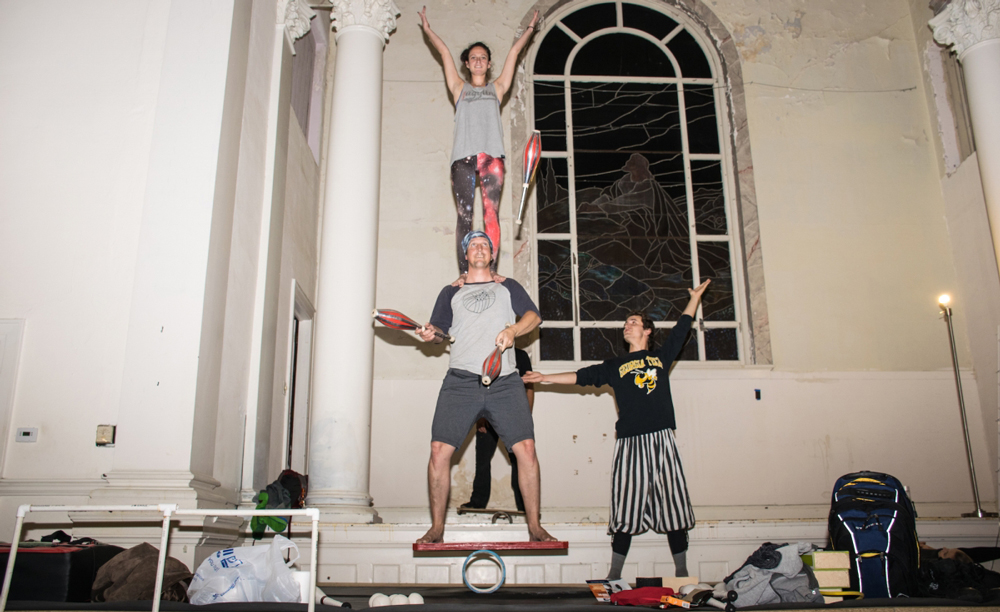 This act uses balancing, juggling, and partner acrobats to wow their audience!

What are the main acts of your circus? Could you walk us through the science of each of them?

Sure thing! I’ve broken down the science behind aerial, partner acrobats, tumbling, balancing/juggling, and our fire show below. 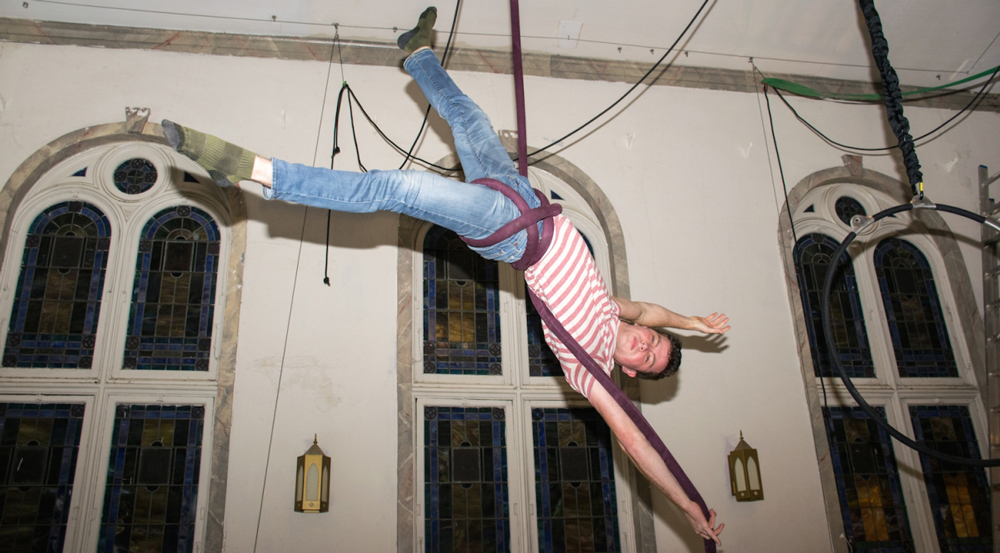 Aerial acts can be performed on silks, lyra, rope, trapeze, and other apparatus. When we scientifically analyze these acts we focus on the rotational motion of the aerialist. Specifically, we like to discuss spinning and how the positioning of our arms affects our rotation. Arm position changes your body’s tendency to resist acceleration as it rotates around an axis – extended arms slow the rotation, while tucked arms speed you up. This helps maintain a law of nature – conservation of angular momentum – which depends on rotation speed and shape of the rotating object. If shape changes, then the speed must compensate to conserve angular momentum by changing as well. Aerialists use this principle of physics to seamlessly transition from rapid rotations to slow elegant motions. 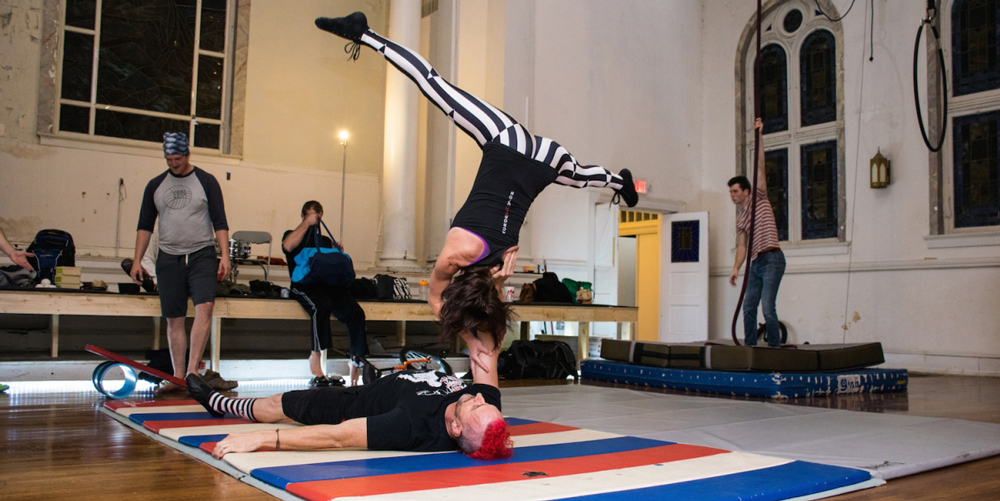 Partner acrobatics often demonstrate amazing feats of strength and flexibility, stacking and tangling many people together. We like to demonstrate positions that look odd due to acrobats leaning or hanging from one another. The scientific trick to these poses comes in analyzing the center of mass, since there can be several acrobats leaning away from each other whom look like they should be falling over. However, the center of mass always remains above the stable point (like feet on the ground) even though there is no physical mass at that position! In these cases, a basic understanding of physics can change the way that acts are viewed. 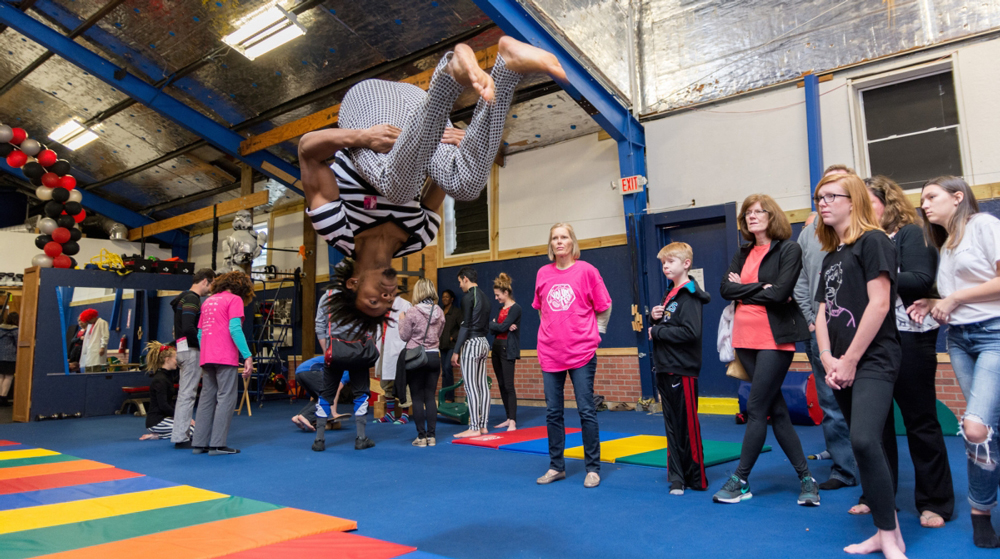 Watching our tumblers jump and flip over each other and audience members always puts a smile on people’s faces! The physical concept demonstrated here is the conversion of linear momentum into angular momentum, like when an acrobat is running in a straight line and all of a sudden tucks into a rapidly rotating position as they make a flip. Since momentum is always conserved, acrobats take their linear momentum (running in an extended body position) and rapidly convert it into angular momentum (flipping with arms and legs tucked). That is why you see these acrobats running so quickly before performing their feats – with all that momentum built up all they have to do is change their body position ever-so-carefully to generate the rotation necessary to perform their amazing flips and twists. 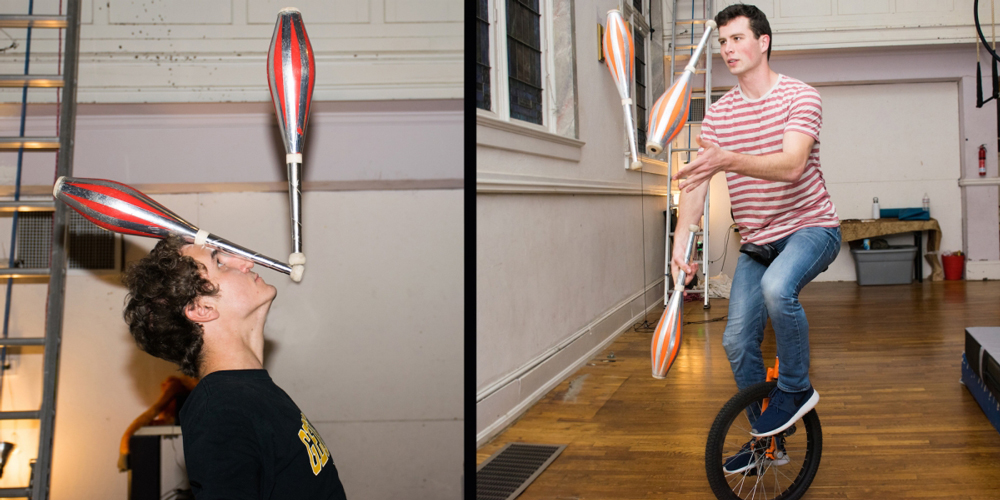 The language of juggling is truly the language of mathematics. All juggling tricks can be described using numbers that represent the number of beats the objects spend in the air, and where the object begins and ends its pattern. Ignoring gritty details, generally speaking odd numbers describe throws that are thrown and caught by different hands while even numbers describe throws to the same hand, with larger numbers of objects requiring higher throws (see siteswap.org for more on this). Perhaps not surprisingly, if you ask a juggler, it is very common for them to have some background or interest in science and mathematics.
Balancing is fascinating from a physical point of view. This boils down to the center of mass and moment of inertia (that is, the tendency to resist rotation) of various objects that a circus performer may want to balance on their chin, or nose, or forehead. An object with its center of mass higher up will have a larger moment of inertia and therefore will require more time to fall. These objects fall more slowly and thus are easier to balance. For instance, it is always amazing to see a performer balance something large like a ladder on their chin, but since the center of mass of the ladder is so high it is actually relatively simple to balance compared to something less impressive like a fork or spoon! 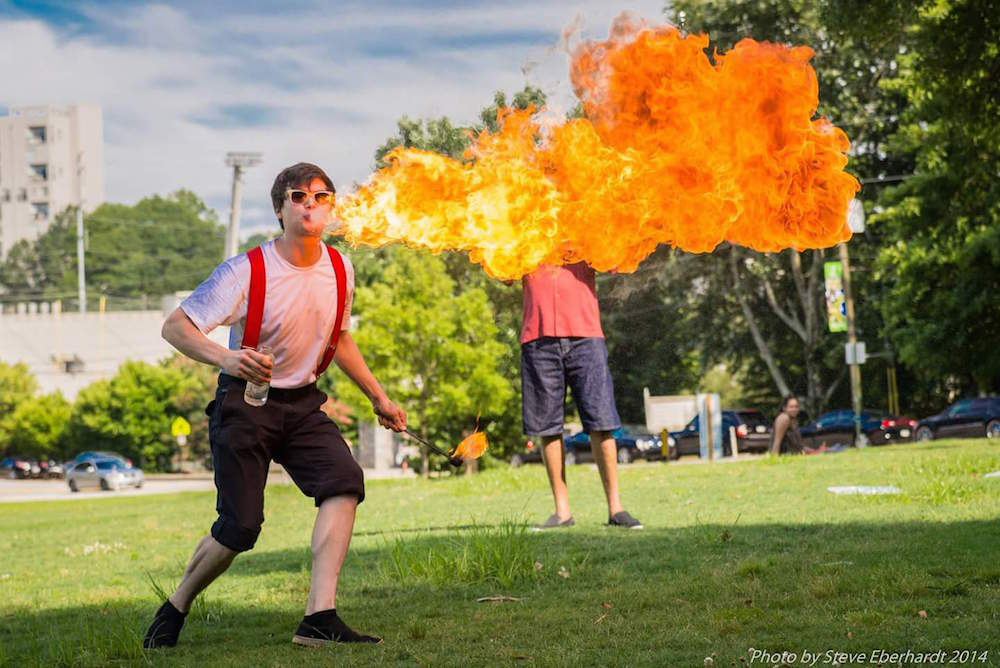 A scientific view of fires requires chemistry! Choosing a fuel with a low burning temperature to allow the performer the most comfort and a high burning efficiency to reduce smoke is essential for a successful fire performance. There can even be fuel chemical additives to allow fantastic colors in the flames! A performer must also understand the idea of ignition temperature, since a wick doesn’t need to be flaming to reignite when reintroduced to the fuel.

What is your favorite part of the circus? Can you share any science secrets about conducting it?

My favorite part of being in the circus is getting such undivided attention from kids who are amazed at all of the diverse acts! Using this amazement to bring young people into a scientific discussion is a slick little trick I like to use to insert science into their everyday lives, especially when they least expect it. 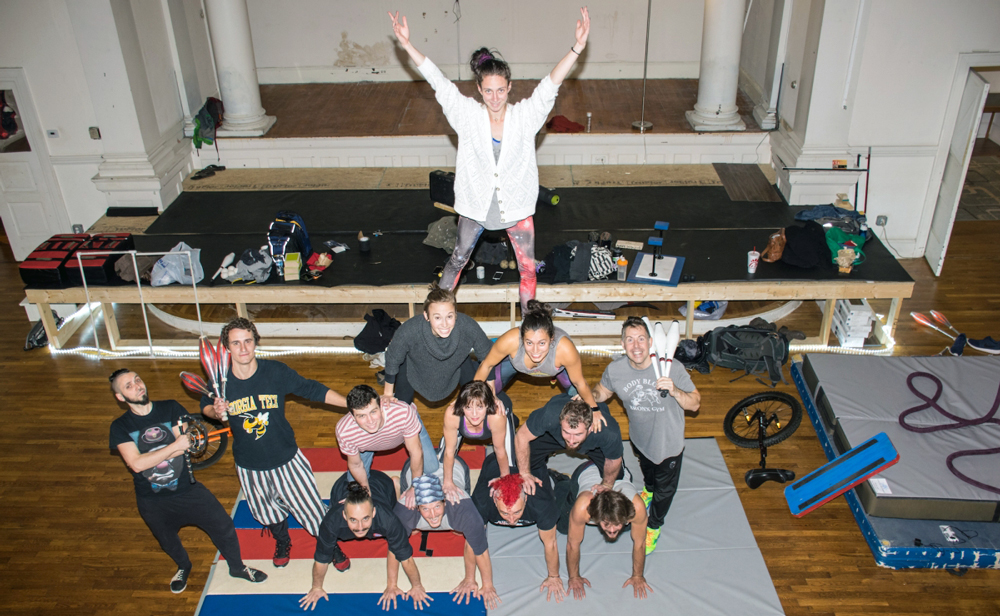 Thank you to Imperial Opa and John Indergaard for walking us through the science behind of the circus. Stay tuned to our website, Facebook, Twitter, and Instagram for more Awesome Science of Everyday Life features and other festival updates!
https://scienceatl.org/wp-content/uploads/2017/12/fire-show.jpg 430 750 Lizzi Skipper https://scienceatl.org/wp-content/uploads/2019/08/logo-science-atlanta.png Lizzi Skipper2017-12-18 20:05:092019-08-23 13:14:42The Science Behind the Circus with Imperial OPA