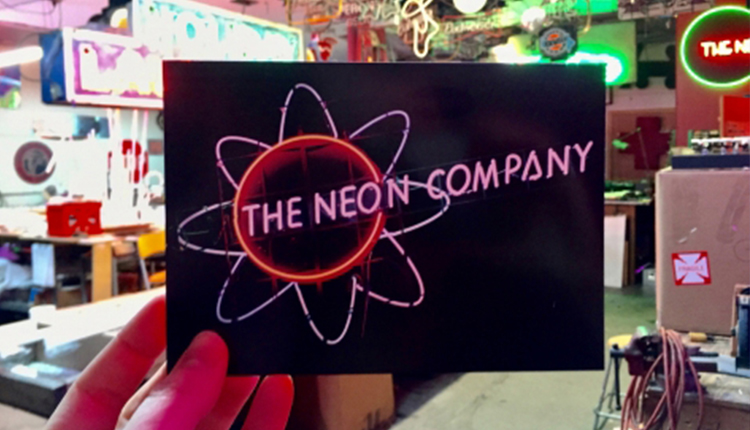 You can’t wander far in Atlanta without seeing the bright, colorful work of The Neon Company. From The Vortex’s iconic skull logo, to the Majestic Diner’s massive outdoor signage, to the hundreds of custom pieces for TV shows and movie sets around the city, the team at The Neon Company specializes in creating neon signs that satisfy the visions of their customers. What most people don’t realize is that each piece created is a result of rare artistic craftsmanship and calculated science. 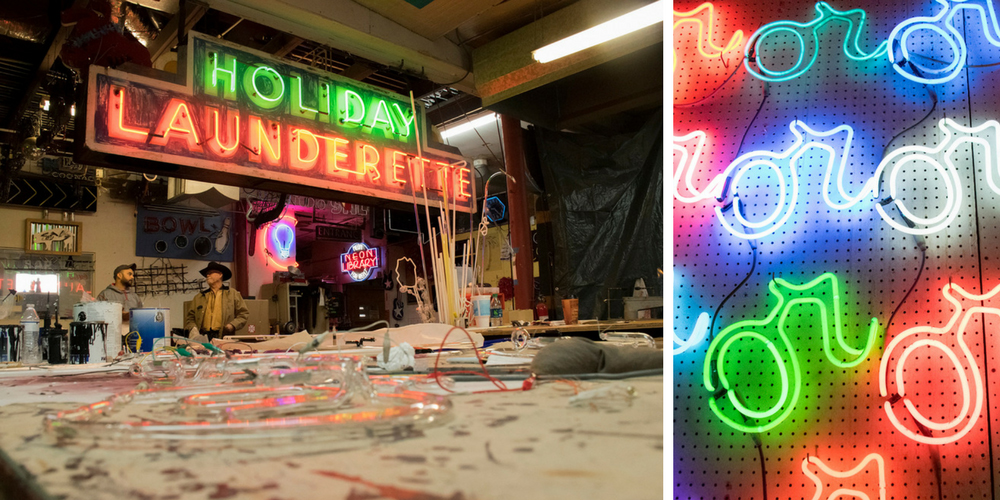 The Neon Company studio is filled with hundreds of beautiful, glowing neon creations.

Opened in 1984, The Neon Company has perfected the art of creating neon signage and art for the bustling city of Atlanta. Gregg Brenner, the founder, president, and CEO (Chief Electron Officer), started the business with a background in science. With an undergraduate degree in biochemistry, Gregg taught high school science in DeKalb County for five years. During his time teaching, playing with neon became a hobby of Gregg’s and grew to become something much more after he received his Master of Science degree from Georgia State University.
We wanted to hear more about the science behind Gregg’s colorful light displays, so we popped into The Neon Company studio along with another local expert on the science of color and light. Eric Shen, a chemist from Georgia Tech, works in the field of organic electronics. His research on electrochromic materials – materials that change colors when zapped with an electric current – provides him with a unique perspective on how color and light can be manipulated. Eric helped give us some insight into what’s going on at the atomic level with the fascinating light displays that The Neon Company produces, along with how it could connect to his own research. 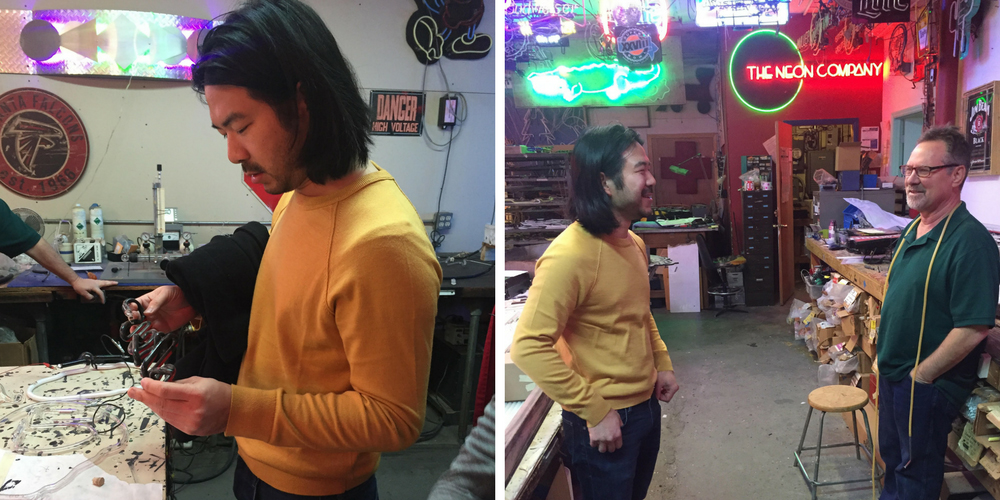 Eric and Gregg discuss the many connections between their two fields of work. In the end, they both deal with light, energy, and electrons!

The neon process can be broken into two parts: the art and the science. Creative design and glass bending involve a lot of artistry. Those steps are immediately followed by the introduction of science and technology when assembling and installing the signs.

The Neon Company receives many neon requests ranging in difficulty.
“We get everything from folks who are just creating their business and don’t know what they want, to well-established companies like Coca-Cola who need a custom job,” said Gregg.
Once the team has an idea of what the job entails, the process starts off at a Windows 98 computer. Yes, you read that right … A graphic for the neon sign is made on a Windows 98 “art” program, which Gregg explains is “so old that no one writes viruses for it.” The computer sends the graphic to a plotting machine that uses a Sharpie to draw out the design on a piece of elongated paper. This outline is used as a stencil for the neon glass benders to work against. 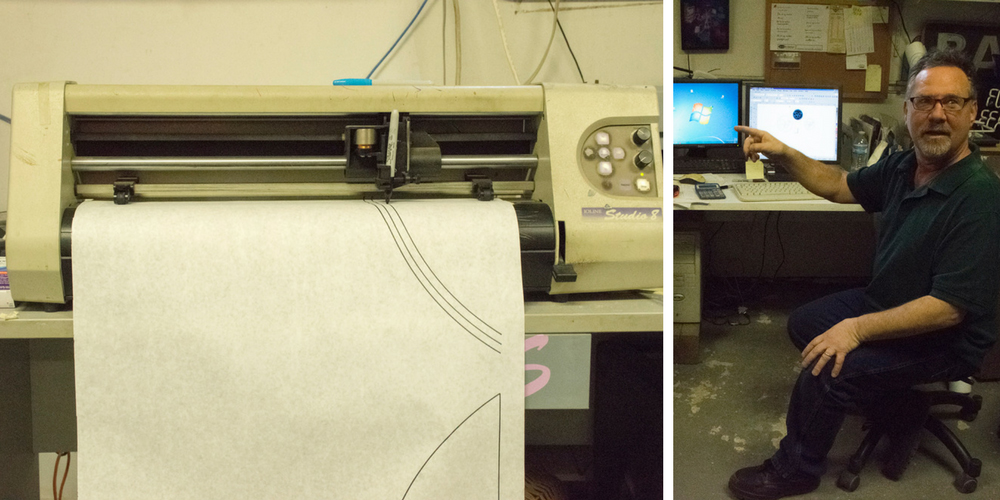 Though some might look at these machines as part of the stone age, Windows 98 provides a dependable server for the programs and equipment needed to produce accurate stencils.

Once the patterns are made, the work gets handed off to Blaze Pearson and Sue Erck, the company’s neon glass benders. Blaze has been bending glass for about 15 years while Sue and Gregg have been bending for 30 years.
“This is the highest level of skill in the shop. It really takes a lot of practice,” Gregg explained. 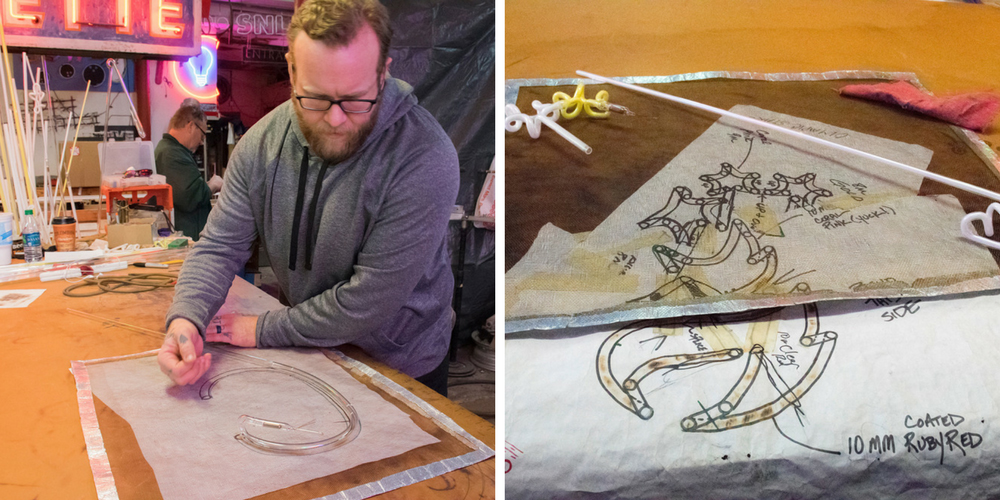 Blaze uses a hand drawn stencil to create a star out of coated glass.

The printed outline is placed under a brass screen top so that the glass benders can lay hot glass on top of the paper as they work. Using a variety of flames and torches, the glass bender heats up areas of the glass tube that needs to be bent in order to make the correct shape, but as the glass bends, the bent area will start to flatten, similar to how a garden hose would. In order to keep the correct diameter, Blaze and Sue use a “blow-hose” to blow air into the tube near those bends. 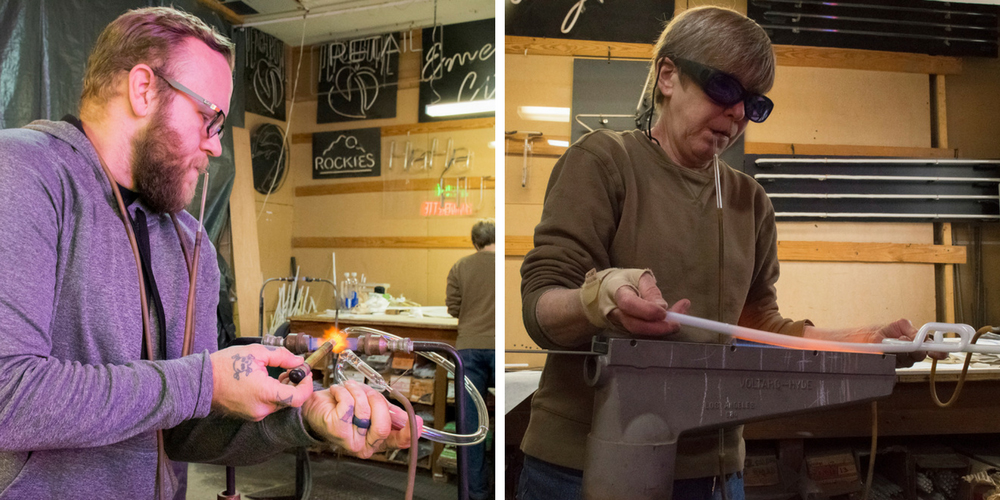 Blaze and Sue use a “blow-hose” to maintain the diameter of the tubes when bending.

The glass they work with hardens quickly, which means there is less time to fix mistakes. Gregg explained that abstract neon signs are the easiest while precise lettering and large circular shapes are the trickiest. Since the variety of signs they make are so large, the team at The Neon Company is never bored.

Sue wears goggles while working, because they help filter out specific wavelengths of light from the flare so she can see which areas of the glass are heating better. You can see the difference in the two images above!

“You really have to think it through but that’s part of what makes the job really fun,” said Blaze. “Every day is different and every piece of glass is different.”
Next, electrodes are added to the ends of each piece, heated, and welded together through a process called the “kissing technique.” 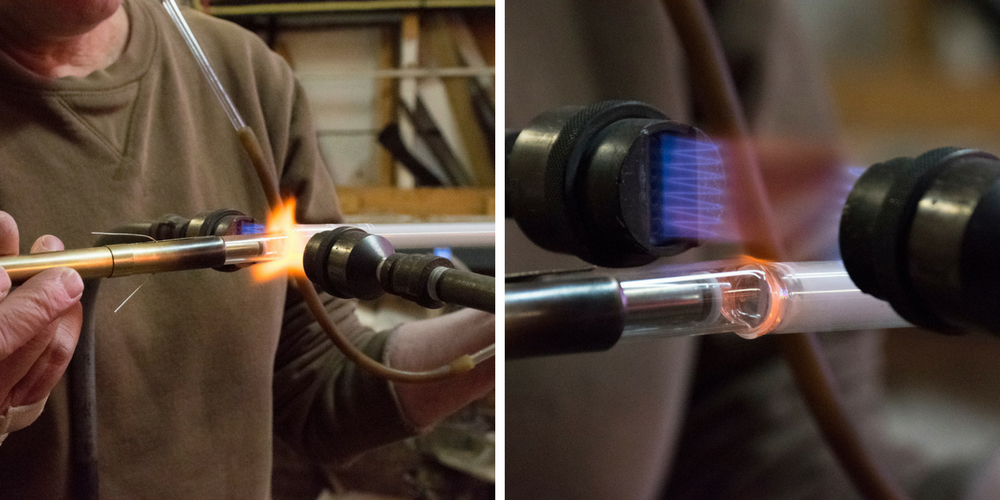 Deemed the “kissing technique”, electrodes are added to the ends of each piece, heated, and welded together before the final assembly.

Once the tubes have been properly shaped, it’s time to introduce the chemistry. Before you can fill the tubes with gases that light up, you have to clear out any air and moisture from inside the tubes with a vacuum pump. After the vacuum does its job, a zap of electricity is added while raising the temperature of the tube in order to sterilize the inside and eliminate any remaining  air.
Once the tube is finished sterilizing, the team has to wait for it to cool down to a temperature low enough to add in the gases, which gives the neon sign its color. 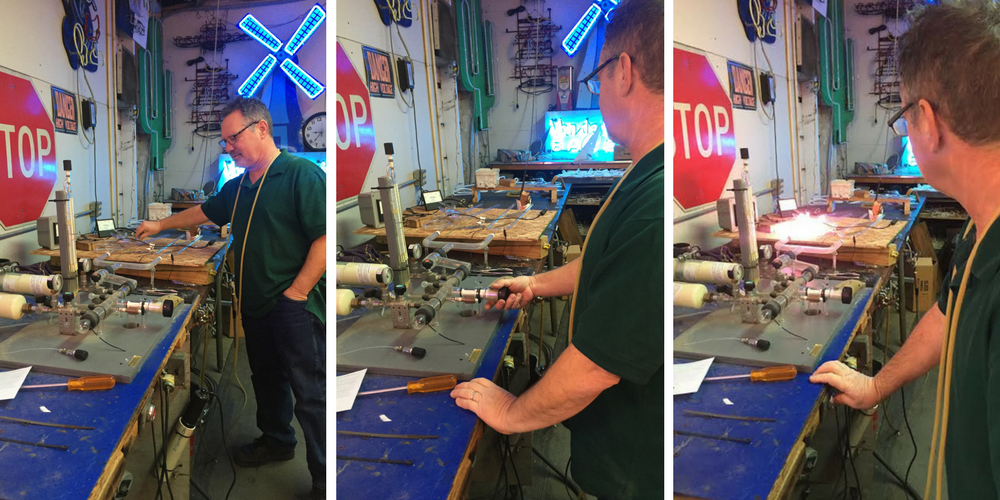 Gregg walks us through the bombarding process which cleans and prepares the tubes to be filled with gas.

The Neon Company mainly uses two gases – neon and argon. Both of these gases are clear when they are added to the tubes, but when electricity is added, they glow: neon glows red/orange in clear glass, and argon gives off a blue/lavender light in clear glass.
So how do these gases go from clear to colored and why do they light up?
“With neon lights, you are applying a huge voltage, which energizes the electrons of the gas atoms. Eventually, all that energy has to go somewhere, and it gets released as light,” Eric tells us. The unique color associated with each gas is connected to the number and arrangement of electrons in the atoms making up the gas. 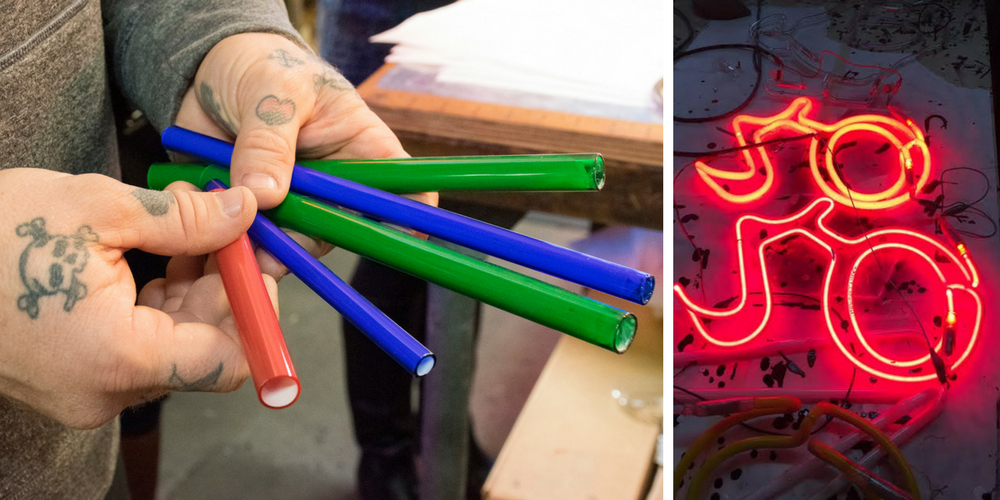 Powder coated tubes (shown in image on the left) distribute light more evenly compared to other colored tubes. The difference can be seen in the two tubes shown in the right image.

Now, as we know, neon lights come in a variety of colors, not just red and lavender. Gregg shows us how he can manipulate the color by using either argon or neon, changing the tube color through stained glass or powder coating (which distributes light more evenly) and by adding mercury. A few drops of liquid mercury will vaporize in the tube and create other color options. Once the correct gas has been added, the tube is sealed off and gets set up for installation.

The pieces are then connected to a transformer to be powered. The transformer generates about 15,000 volts and 60 milliamps, which is what provides that jolt of energy to the electrons in the atoms of the gas in the tube. As Eric told us, the energy goes in as electricity and comes out in the form of light and heat, giving us the neon lights that glow as they should. After being correctly powered, the neon signs are ready to be installed. 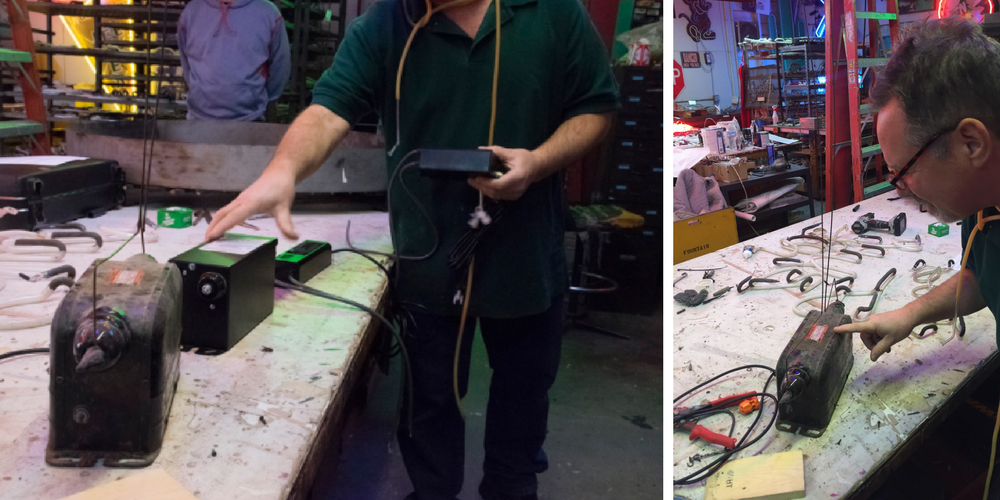 Each and every neon sign and piece of art that The Neon Company produces is the result of incredible skill, science, and passion. In a world where businesses are trying to cut labor and have everything be run through machines and computers, Gregg, Blaze, and Sue at The Neon Company keep their craftsmanship alive and well.
“The neon industry is shrinking. It’s now more of a small, decorative industry [compared to the lighting industry as a whole],” commented Gregg. Eric, however, had other ideas on how to grow the field. As we were clearing out, the two started talking about how they should experiment with coating Gregg’s neon tubes with Eric’s electrochromic paint-like films to manipulate the color of the lights even more.
Who knows if that will ever come to fruition, but what we know for sure is that the city of Atlanta continues to glow bright with The Neon Company’s handcrafted, neon signage lighting its streets. 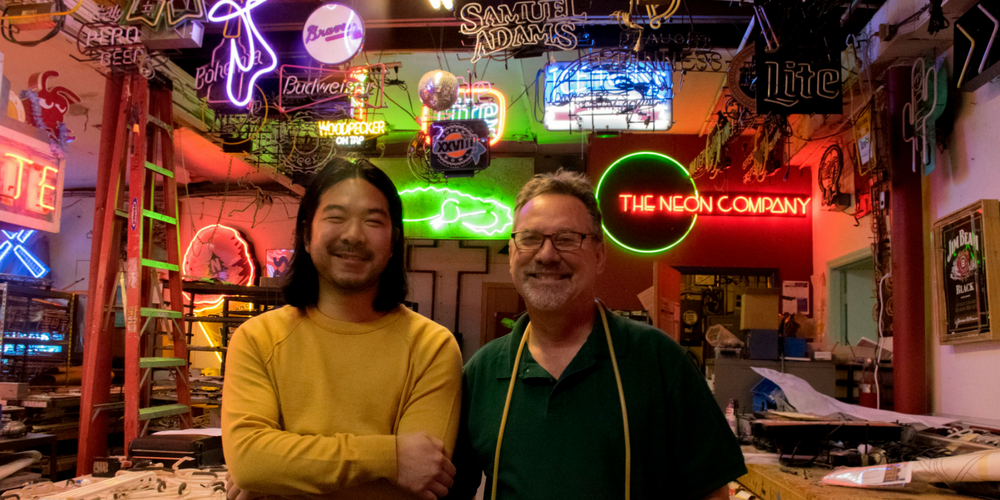 A big thank you to The Neon Company and Eric Shen from Georgia Tech for walking us through the magical science behind neon lights.
Stay tuned to our website, Facebook, Twitter, and Instagram for more Awesome Science of Everyday Life features and other festival updates!
https://scienceatl.org/wp-content/uploads/2017/01/blog-the-neon-company.jpg 430 750 Lizzi Skipper https://scienceatl.org/wp-content/uploads/2019/08/logo-science-atlanta.png Lizzi Skipper2017-01-17 18:00:012019-08-23 13:14:42The Science Behind Neon Lights with The Neon Company and Georgia Tech