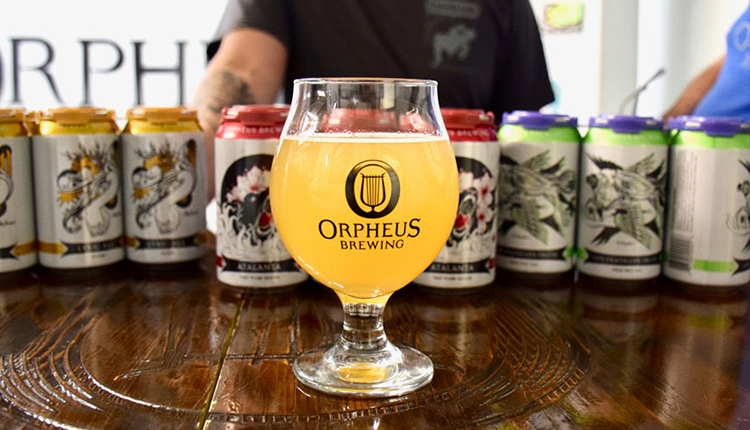 Have you ever wondered what gives beer its complex, distinct taste? What makes a Budweiser taste different from a locally-brewed IPA? Or a stout taste different from a pale ale? The science behind beer is both fascinating and intricate, so we turned to Orpheus Brewing founder Jason Pellett and Georgia State University microbiologist Dr. Chris Cornelison to break it down for us.

Jason Pellett is the founder, president, and brewmaster of Orpheus Brewing here in Atlanta. As a brewery, Orpheus has historically focused on sour beers. Their flagship brew, Atalanta, (pictured below) was actually the first packaged sour beer made in Georgia! The art and science of making beer is an important part of the process for Orpheus, so the team undergoes internal training on a regular basis to examine and explore the biochemical processes that happen during the beer making process.

Jason took some time to answer a few of our questions about Orpheus Brewing, his journey in beer making, and his take on the science behind beer.

When and how did you first become interested in brewing?

I brewed for the first time in my early twenties when it just went along with making everything else from scratch, but that was short lived. I really became interested in brewing after becoming enamored with sour beers back in 2009. I spent about a year just learning everything I could about how sour beers are made before starting to homebrew again in 2010. Though I didn’t think I’d ever actually be able to open a brewery, I focused my homebrew on sours and saisons and kept my eyes on opening a brewery of my own one day.

What scientific element of the beer making process interests you the most?

We’re dealing with live cultures, and everything we do influences their ecosystem, which in turn impacts the beer itself. Many of the flavors created by synergistic reactions within mixed culture fermentations, fermentation processes, and hop compounds are not understood very well. Exploring this area is where most of the art of making beer happens, but it’s also an area ripe for further research.

What is your favorite beer, and can you tell us the microbiology behind that beer that makes it appealing to you?

The beer I’ve been drinking the most lately is Noise and Flesh, our house barrel-aged beer. The wild culture that we use to sour many of our beers (Atalanta, Wandering Blues, and Serpent Bite, Sykophantes) has a diverse microbe population. The souring utilizes various strains of lactobacillus to make lactic acid, but there’s also a large yeast population. For Noise and Flesh we use the culture to not just sour, but also to ferment the beer. We get the sour taste from the lacto, and great stone fruit esters from the yeast.

Dr. Chris Cornelison (pictured center in the image above) is an applied microbiologist and adjunct professor at Georgia State University. His area of focus is applied and environmental microbiology, which means he studies microbes in their natural environment (presence, distribution, and function) as well as how to use specific microbes or microbial processes for a specific purpose (making beer, treating waste water, and increasing plant growth/productivity). In general, microbiology involves the study of microorganisms including bacteria, archaea, algae and fungi.
We asked Dr. Cornelison to answer a few questions about his specialty and the many scientific processes and steps that are involved in making beer.

What fascinates you most about microbiology?

Microorganisms are the reason all other “higher “organisms exist. They created and sustain our atmosphere, cycle our nutrients, allow us to digest food, clean up our waste, and make many of our medicines. They can live on light and inorganic molecules, as well as at the hottest and coldest places on the planet- even in radioactive wastes. By cell number, a human being is more bacteria than human. The more I learn about the significance and versatility of microorganisms, the more interesting they become.

Describe the microbiological process that is involved in the creation of beer.

The basic material of beer is simply yeast food. Water and grain are boiled so that the naturally occurring enzymes in the grain will convert complex sugar polymers into small fermentable sugars. This solution (wort) is cooled and inoculated with yeast (naturally or intentionally). The yeast consumes the sugar and converts it to ethanol and carbon dioxide, as well as generates additional low concentration byproducts that contribute to the overall flavor of the beer. At some point, all the sugar will be consumed or the yeast will produce more ethanol than they can tolerate and the process will stop. An additional role of microbes in beer is as spoilage organisms. These are typically acid producing bacteria or wild yeast that produces byproducts not intended in the beer and therefore considered off-flavors.

What microbiological factors affect the various flavor elements of beer?

The yeast strain selected or the natural consortia of microbes associated with the grains and water if the brewer is choosing to use a natural fermentation impacts the flavor of beer. Also, the composition of the wort and the temperature of the fermentation will influence metabolic activity of the yeast and therefore the diversity and concentration of byproducts they produce.

Once the beer is made, how does microbiology come into play in terms of the packaging and distribution of beer?

The brewer may choose to use bottle conditioning, where yeast carbonates the bottled beer. A small amount of sugar and yeast are added to the beer when bottled. The yeast rapidly consumes the sugar and makes carbon dioxide in the bottle. The carbon dioxide is forced into the solution, carbonating the beer. The yeast dies when the sugar is fully consumed and settles to the bottom. Additionally, this is a typical route of introduction of spoilage organisms, therefore strict sanitation practices are typically maintained on the filling lines.

What is the coolest or weirdest fact about the science behind beer you’ve ever heard?

Lager yeast doesn’t appear to exist naturally outside of the brewing environment. It is a hybrid yeast which wasn’t identified in nature until 2011. Some lucky Germans just happened to have this rare wild yeast show up in their brewery and hybridize (a very rare event) with ale yeast to create the lager yeast that dominates Macro-brewing globally, a multi-billion dollar industry.

What is your favorite beer, and can you tell us the microbiology behind that beer that makes it appealing to you?

It depends. I drink a lot of different stuff and always enjoy trying something new. Right now, I have been drinking traditional Belgian beers, Leffe, Hoegaarden, etc. But I also have some local favorites including Orpheus Atalanta and Eventide’s Kolsch. As the weather cools, I will incorporate some stouts and brown ales into the mix. The lineup at Orpheus has me excited from a microbiological standpoint. They are doing some pretty creative stuff. Their use of the bacterial mother culture for souring as well as various barrel-aging processes creates some very unique products.

A big thank you to Georgia State and Orpheus Brewing for walking us through the science behind beer. Stay tuned to our website, Facebook, Twitter, and Instagram for more Awesome Science of Everyday Life features and other festival updates!

The Awesome Science of Everyday Life

Every other month we will be collaborating with different Atlanta-area organizations and scientists to explore the sceince behind everyday life. Be sure to check back for the latest posts and behind the scenes looks, and stay tuned to our sociel media channels to get a sneak peek at upcoming collaborations!