Join us in July, as we celebrate the 50th anniversary of Apollo 11’s historic moon landing. 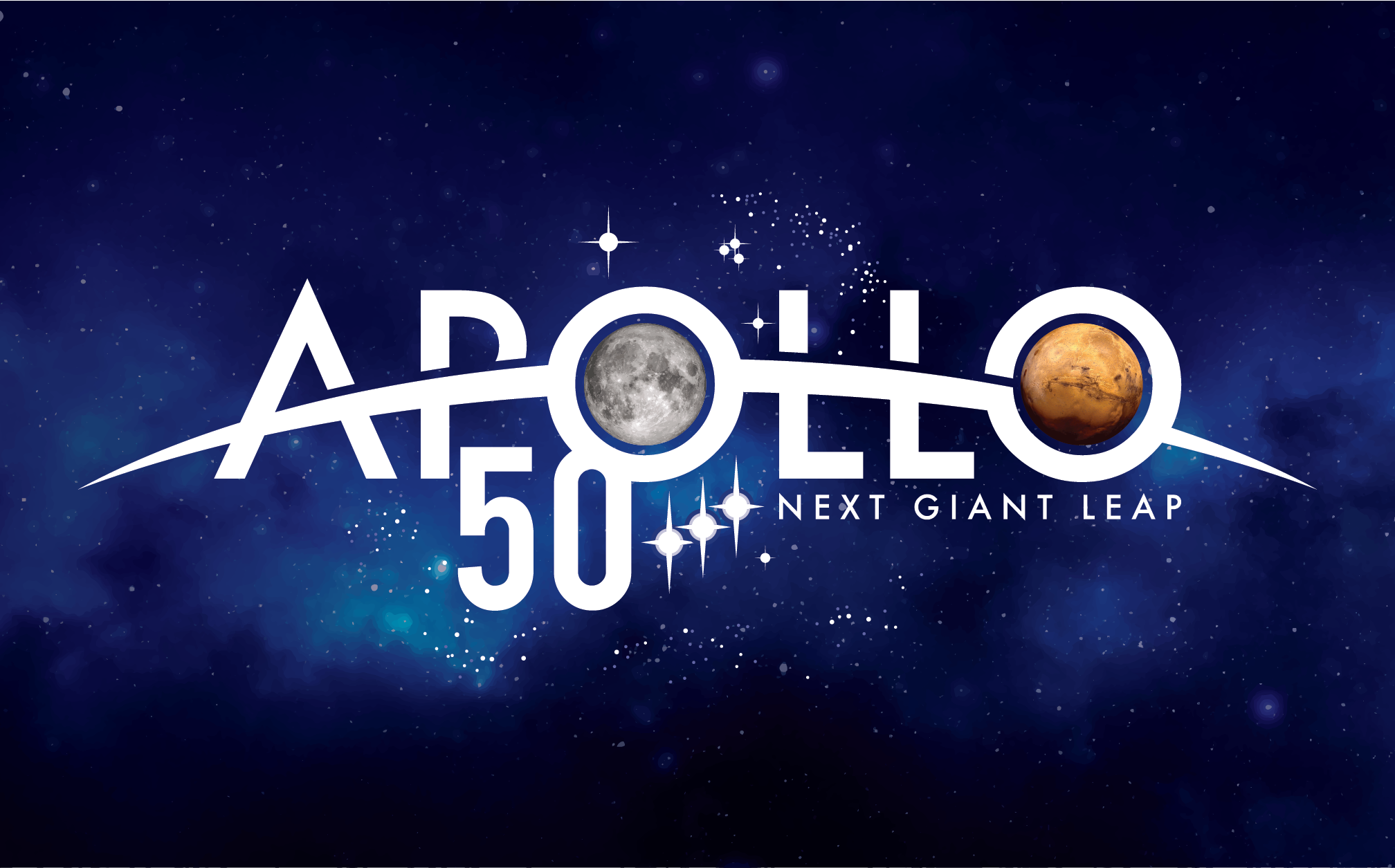 SCIENCE TALES & TRAILS: A MOONWALK TO CELEBRATE THE MOON LANDING

50 years ago man landed on the moon. Let’s take a walk on the night of the Full Moon (and 50 years from the day the Apollo mission launched toward the moon) and learn about our closest celestial neighbor.

This event is great for families and adults. It is free and requires no advance registration. Produced by Science for Georgia in partnership with Science ATL.

R. Scott Harris (Staff Planetary Geologist, Fernbank Science Center / DeKalb County School District) will lead the evening event.  Most recently, Scott has served as visiting lecturer of mineralogy at Georgia State University, visiting researcher in impact geology at Auburn University, and geologist for the Georgia Department of Transportation. In 2014, he seized the opportunity to become the staff planetary geologist at Fernbank Science Center and the Jim Cherry Memorial Planetarium where he strives to educate and inspire the next generation of scientists and explorers. 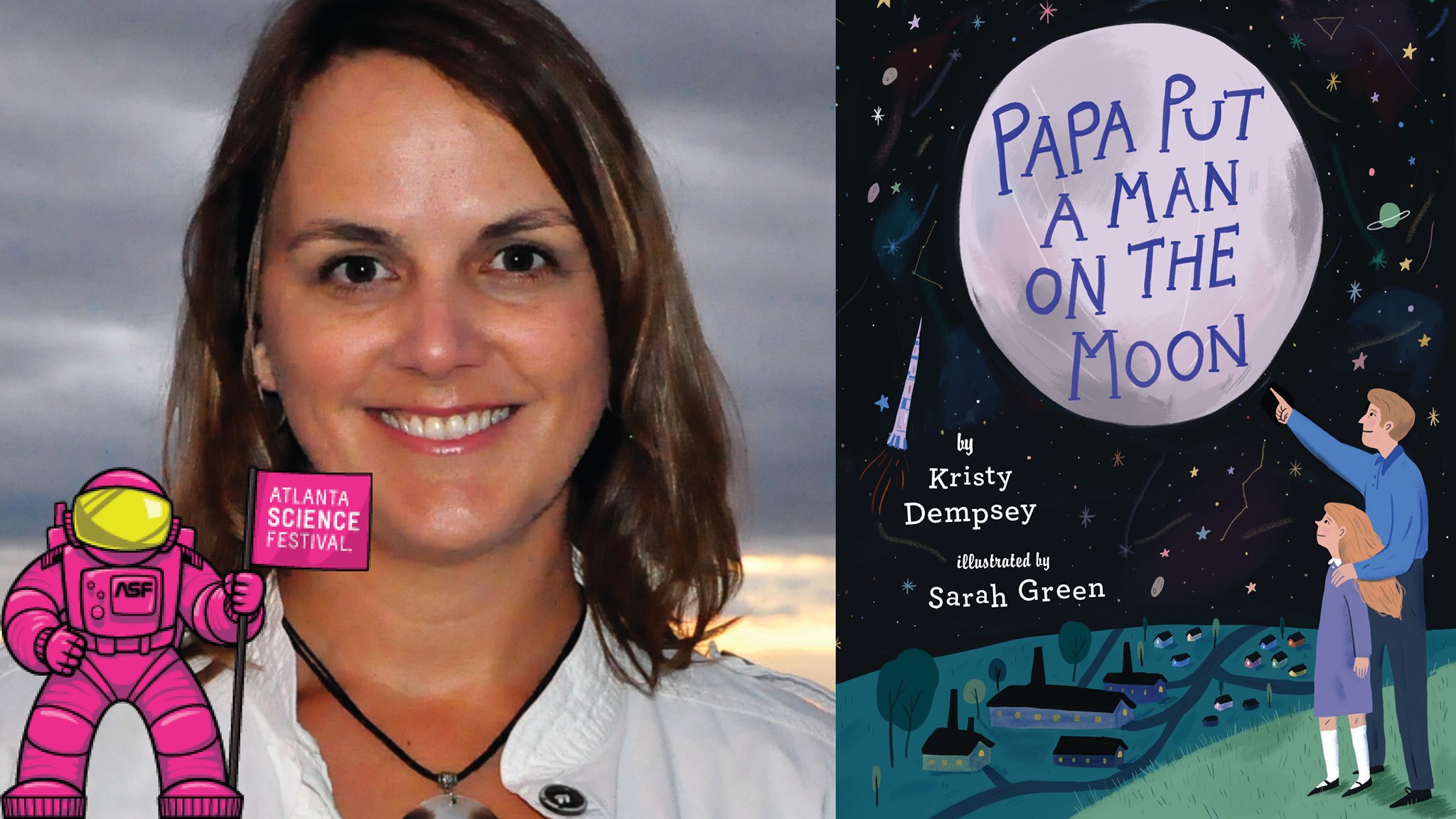 You’d have to be living under a (moon) rock to have missed the news that this July marks FIFTY YEARS since the moon landing! We are celebrating on Sunday, July 21 with Kristy Dempsey, the author of PAPA PUT A MAN ON THE MOON, and our friends at Little Shop of Stories. There will be a book presentation and signing along with some moon-themed refreshments. Atlanta Science Festival will also be selling SOLAR SYSTEM BRACELET kits for $5, so you can make a super cool science craft, too! Learn more about Kristy Dempsey’s newest book below and mark your calendars to celebrate with us!

This event is free and open to the public. Be sure to purchase a copy of PAPA PUT A MAN ON THE MOON from Little Shop of Stories to earn a place in the signing line! And the solar system bracelet kits are available for $5, cash or card (while supplies last).

More about PAPA PUT A MAN ON THE MOON:
In time for the fiftieth anniversary of the moon landing, this father-daughter story celebrates a small community’s big contribution to one of America’s greatest accomplishments.

Marthanne and her father sit side by side, looking out over their mill village as the moon glows in the sky. Marthanne hopes that one day, man will walk on the moon, and she knows her father is helping America accomplish this mission: The fabric he weaves forms one layer in the astronauts’ spacesuits. Papa insists he’s only making a living, but Marthanne knows his work is part of history, and she’s proud. She tries to be patient, but she can’t stop imagining the moon mission: the astronauts tumbling through space, the fabric her papa made traveling all the way up into the sky. When the astronauts blast off and Neil Armstrong finally takes his first steps on the moon, Marthanne watches in wonder. She knows her papa put a man on the moon.

These events and more are listed on our Science Scene calendar, bringing you engaging public science events all year round.

Lunar Geology
Duluth Branch – Gwinnett County Library
2-3:30 pm
What is the moon made of? Is it made of cheese? Guest Thomas Faller from the Georgia Mineral Society will explain this and more.

Storytime: Apollo and the Moon
Sewell Mill Library and Cultural Center – Cobb County Public Library System
2-3 pm
Solar System Ambassador, Chris Thompson will join the Sewell Mill Library for an out of this world program. Mr. Thompson will share stories about the Apollo and moon landings and answer all of your space questions. No registration required. Daycares & Camps please call 770-509-4936 one week in advance. This program is intended for all ages and their adult caretakers.

It Came From Space: Lunar Geology Program
Five Forks Branch – Gwinnett County Library
1-2pm
Join us as the Georgia Mineral Society takes us to the moon and back with a special presentation on lunar geology and local minerals.

A Universe of NASAs 50th Anniversary of Apollo 11s Historic Moon Landing in Union City
South Fulton Branch – Atlanta Fulton Public Library System
4-5pm
Join us for a live webcast of the guided recreation of Apollo 11s journey to see how this mission was executed by crew members and mission control in Houston.

Moon Bar
Mother
8pm
This July marks the 50th anniversary of the moon landing. Join us as we transform the upstairs bar into an immersive alien planet featuring an intergalactic video installation art show, titled Lunar, with space-themed drink specials. This event will be part of a week of Art and Mixology celebrating the countdown to the anniversary of the moon landing. Events for Ages 21+

Sugar Hill GA’s Global Rocket Launch
12pm
Sugar Hill is excited to partner with the U.S. Space & Rocket Center in Huntsville, Alabama, on a Global Rocket Launch to celebrate the 50th Anniversary of the Apollo 11 mission to the moon. Sugar Hill will host a community rocket launch event followed by a matinee showing of the new “Apollo 11” film in the Eagle at 3 p.m. The movie will be free to those who participate in the rocket launch and $2 for those who don’t.

Lunar Landing Challenge
Collins Hill Branch – Gwinnett County Library
4-5pm
Can you build the best lunar lander? Shoot for the moon, and you may win a prize!

GPB to the Moon
This summer PBS and GPB will present a multiplatform celestial programming spectacle sure to excite any space enthusiast with new history and science programs to commemorate the 50th anniversary of the Apollo 11 moon landing. GPB to the Moon is the online home to an astronomical collection of original content and related link to local events.

Celebrating the 50th anniversary of Apollo 11
Mountainview Regional Library – Cobb County Public Library System
7-8pm
Join NASA Ambassador Chris Thompson and the Mountain View Regional Library as we celebrate the 50th anniversary of the Apollo 11 launch. Mountain View patrons will join the history books by being able to touch space rocks just like Neil Armstrong and Buzz Aldrin. Lunar and space meteorites and other NASA memorabilia will be on display for patrons to look at and touch. Mr. Thompson will also discuss the history of the Apollo missions and the future of NASA and space exploration.

Lunar Landing Challenge
Mountain Park Branch – Gwinnett County Library
3pm
Celebrate the 50th anniversary of the Apollo 11 moon landing by assuming the role of a NASA aerospace engineer! Build a shock-absorbing system to protect two marshmallow “astronauts” upon landing and compete against teens from other branches. The top 3 engineers will win a prize!

Moon Landing Celebration
Fernbank Museum of Natural History
10 am – 1pm
Usher in the 50th anniversary of man’s first steps on the moon in a special celebration of NASA’s 1969 moon landing with interactive activities and special screenings of Apollo 11: First Steps Edition 2D.

Starlab: Moon Landing 50th Anniversary
Chattahoochee Nature Center
3-4pm
Join us for a special StarLab in commemoration of the 50th Anniversary of the Apollo 11 moon landing. We will learn about the first manned mission to the moon, the phases of the moon, and summer constellations in our planetarium. You will leave prepared to view the night sky during the cool summer nights. Ages 6+ (note that the planetarium is in complete darkness).

Space Exploration Day
Children’s Museum of Atlanta
10am – 5pm
Join us for a fun celebration – then go home and look at the moon & stars and think about what we have learned about our planets and solar system!  Play Planet Jeopardy or listen to storytime with readings of Hidden Figures: the Story of Four Black Women and the Space Race or Roaring Rockets: Amazing Machines!  Have fun running around for our Planet Scavenger Hunt or visit one of our learning labs to build your own rocket and much more.

One Giant Leap
Collins Hill Branch – Gwinnett County Library
2-4pm
Family program, all ages welcome! Come learn about the moon, the Apollo 11 mission, and more about space! Use our Oculus Rift virtual reality headset, participate in science labs, and create fun crafts while learning about the 50th anniversary of the first man on the moon!

Apollo 11 Anniversary
Hamilton Mill Branch – Gwinnett County Library
2-3 pm
It’s been 50 years since man first landed on the moon! Celebrate with us by learning about the Apollo 11 mission and the moon itself through fun games and activities! A program for ages 5 and up.

Lunar Landing Challenge
Dacula Branch – Gwinnett County Library
12:30-1:30pm
Celebrate the Apollo 11 moon landing by assuming the role of a NASA aerospace engineer! Use the engineering design process to create and build a shock absorbing system to protect two marshmallow “astronauts” upon landing. This program is intended for teens.

Lunar Landing Challenge
Duluth Branch – Gwinnett County Library
5:30-7:30 pm
Come celebrate the 50th anniversary of the Lunar Landing by designing a Lander Shuttle for your Marshmallow “astronauts” to survive a long drop. Will your lander beat out the other library branches. This program is intended for teens.