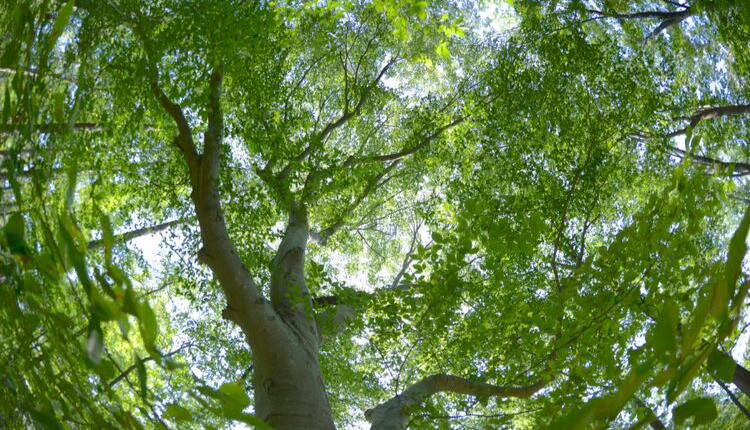 When I greet Kathryn Kolb near Proctor Creek Trail, she leads me towards a slope, “This little patch right here, is attached to a large tract of old-growth forest. It looks like nothing, but it does have some characteristics that are consistent with areas where we find old forests. There’s a steep slope and narrow stream corridor, so people didn’t disturb the soils here when they started farming and building”. We’ve met to discuss the history and ecological impact of old-growth forests and trees in the Atlanta region.

Kolb has worked with organizations such as The Wilderness Society, Georgia Forestwatch, Georgia Conservancy, and Trees Atlanta to raise awareness and provide education on the important processes and roles that trees can provide. Kolb has been a naturalist for over 30 years in the Southeast United States and is an expert on old-growth forests within the city of Atlanta.

What Are Old-Growth Forests? 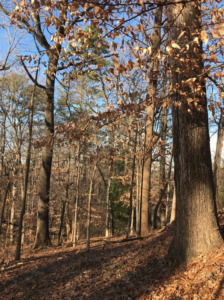 Old-growth forests are typically defined as an area of land undisturbed by human agriculture or development for 120 years or more. The soil and plant life in these areas has remained relatively untouched from human influences. 200 years ago, Atlanta was home to an expansive old-growth forest. These forests provide unique ecological features, including large trees, multi-layered canopies, rich soils, and unique biological niches for native species. [Image 1] Kolb explains, “A lot of the trees in old-growth areas are not necessarily older trees, they’re younger trees. It’s possible to tell an area is older from native plants, called indicator species, such as bloodroots, trilliums, and hepatica”. Most of these species have seeds that are not distributed by wind or transported by sticking to larger animals. The seeds are distributed by ants or just fall close to the mother plant, so they are a continuation of original plants and don’t migrate from other areas. An abundance of these ‘indicator species’ signifies the soil and root networks have been mostly undisturbed by development or agriculture.

As Kolb leads me into an area of old-growth forest, the vibrant natural diversity becomes almost immediately apparent. Invasive ivies abundant along the road completely disappear. Within fifteen minutes we encounter beech, pine, sourwood, hickory, oak, black gum, and tulip trees. Kolb has an expert eye, identifying the various species and pointing out each to me as we walk.

Kolb emphasizes how the history of Atlanta is unique from most other major metro cities in the United States. The primary difference being that Atlanta’s development was relatively late, beginning around 1821, almost 100 years after most other major cities on the eastern seaboard. Shortly after, the Civil War began, and the area stayed in a depressed and rural condition. Wide development and expansion of Atlanta didn’t truly begin until the 1960’s, Kolb explains. The byproduct of this slower development is that Atlanta didn’t go through the sprawling intermediate phase most other cities went through, resulting in the retention of ‘old-growth forest’ throughout metro Atlanta. This is a unique characteristic of a major city in the United States. Few other cities harbor ancient trees and soils that provide such rich biodiversity. The untouched soils and tree growths around Atlanta are not only unique, they also provide important natural resources and biological processes that benefit our city.

In addition to providing a link to the history of the land, Kolb explains that these trees all provide practical resources to our community. One is controlling storm run-off. When tree root networks are removed from an area, the soils are easily washed away by stormwater. However, when the tree root networks are maintained, the roots hold the soil in place, preventing erosion and loss of hill slopes. The rich soils in these older, undisturbed areas also absorb water, preventing the water from flooding down-slope regions. Increases in urban development and concrete abundance, prevent water from being absorbed into the ground, leading to larger amounts of flooding. This is easily seen around the city when giant puddles form on the sides of roads and sidewalks during storms. Areas that have large tree populations are less prone to such issues.

It’s All About the Soil 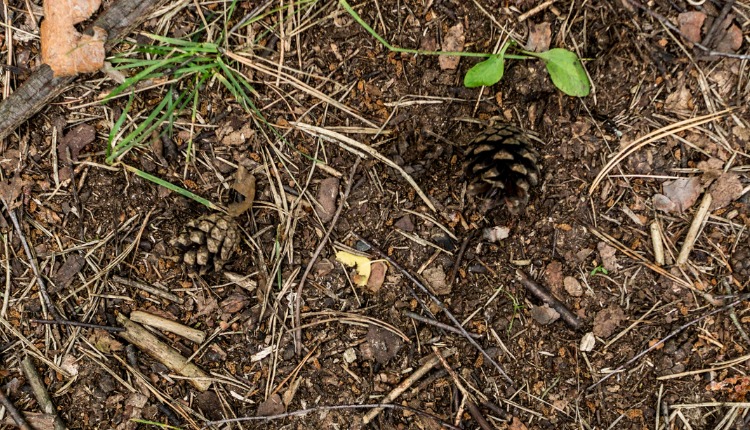 The soils in remnant forests not only absorb storm runoff but contain unique fungi. Those fungi have partnerships with all the other species. “It’s all about the soil”, explains Kolb. During our walk, I notice that the soil does, in fact, feel different underfoot. It is very soft with a thick layer of debris and organic material on top, causing my shoe to sink nearly an inch into the ground as I walk. Microbe and fungi populations within this thick layer of organic material and soil work together in a biodiverse network, promoting the growth and life cycle of native species.

Think of a biodiverse forest network like a city. The roads, people, houses, and stores all work together to provide a thriving community. In a similar way, the trees, fungi, microbes, soil, water, and plants all work together through chemical, biological, and geological processes to help one another thrive and grow. For example, orchids are fully dependent on fungi for their seed germination and life cycle. Without fungi, they cannot reproduce new flowers. And orchids are not alone; many native forest species depend on the interconnected system of tree roots, rotting organic matter, fungi, and microbial populations in the soils that these untouched forests contain.

Another benefit to native tree populations and old-growth forests is they clean our air of pollutants through photosynthesis, the process by which plants metabolize energy and grow. Plants convert light energy from the sun into chemical energy that the plants can use as food. In this process, the plants take in carbon dioxide (CO2), water (H2O), and sunlight and then convert those into carbohydrates (CH2O), which the plants use to grow, and oxygen (O2), which goes into our atmosphere. When the plants and trees take in carbon dioxide and release oxygen, they help improve the air quality in our neighborhoods. In 1994, trees in urban forests in Atlanta removed an estimated 1,196 metric tons of air pollution at an estimated value to society of $6.5 million. Larger, older trees such as those in old-growths are especially good at this process and can process a much larger volume of carbon dioxide than younger trees can within a year.

Kolb works through organizations and community networks to protect and raise awareness of the utility of forests, but also the aesthetic and emotional value they provide. Through her work and the work of other area naturalists, Atlanta has earned a reputation of being a highly forested city with rich tree canopies. These trees are not only practical resources, they are also a living history of the city of Atlanta. As we walked further into the pocket of forest, we approached a large beech tree, much larger than any of the other ones we had encountered. [Image 2] Kolb estimates based on its size, it may be older than 200 years. To try to get an idea of the tree’s age, we examined the etchings on the tree made by other people decades ago, “Keith + Franklin, 1977”, “1956, Roy F”, “W, 1911.” 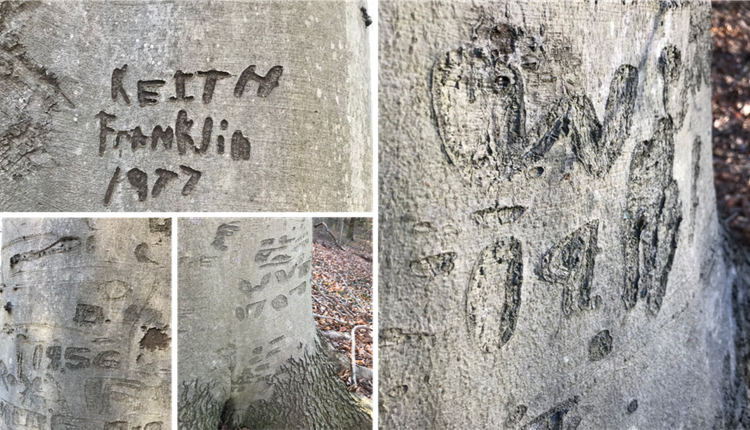 Etchings on an old beech tree, showing a living history of Atlanta.

Some of the markings are old enough that they have been stretched to the point of unreadability as the tree has grown. It is a tall, gorgeous sentinel, that has withstood Atlanta’s continuous growth, a larger than life illustration of how these forest remnants are a natural part of our city’s past, present, and (hopefully) future.

Thank you so much to Kathryn Kolb for taking us through a journey of Atlanta’s biodiverse history! Learn more about Atlanta’s public old-growth forests here, visit Kathryn’s website, and get involved with EcoAddendum, which raises awareness of Georgia’s natural environment. Follow Science ATL on Facebook, Twitter, and Instagram for more Awesome Science of Everyday Life features and other science updates! 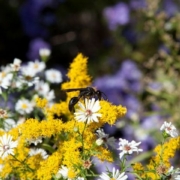 Lunch and Learn: All About Native Plants 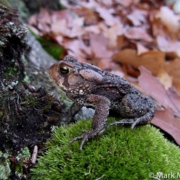 Amphibian Decline and the Importance of Habitat Restoration

The Awesome Science of Apples at Mercier Orchards
Scroll to top