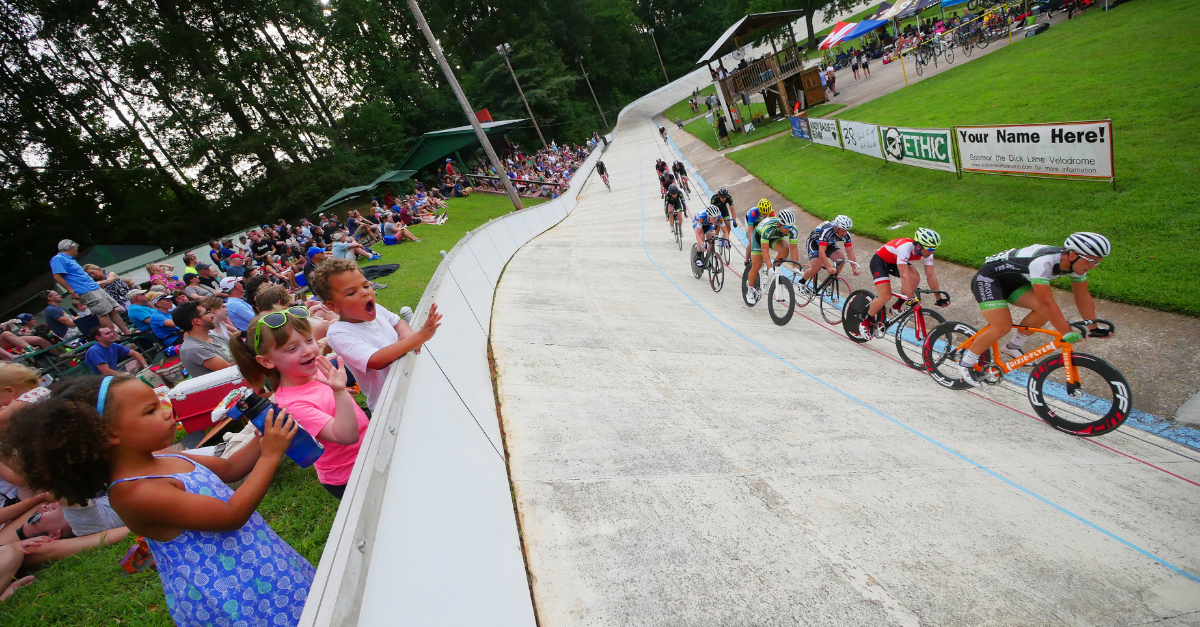 It was a beautiful fall morning and I was biking with my friend Chanel on our way back from an arduous 40-mile ride when we passed the scenic Sumner Park in East Point. Chanel Zeisel started regular bike racing in 2015 and finished her first USA cycling track race in Los Angeles two years later. We entered the park, home to an oval-shaped track; it was similar to a running track but its platform was sloped. As an active road cycling athlete myself, I had heard of track cycling races, but this was the first time I had seen a velodrome: a superelevated, oval-shaped track used in the sport of track cycling.

The only velodrome in Georgia and one of the only 22 active velodromes in the United States, the Dicklane Velodrome (DLV) was constructed in 1974 as an initiative led by a group of locals who had visited the Munich Olympics and were inspired by the sport of track cycling. One of a kind, the East Point velodrome loops a grassy island, home to an oak tree and a running creek, that provides both cyclists and spectators with a view of natural serenity that contrasts with the adrenaline rush and the thrill of the races.

The track is  ⅕ mile with a maximum angle of 36 degrees on the banks. My eyes fell on the steep embankments, as we pulled our bikes onto the track. “How on earth can you ride a bike on such a steep surface?!” I gasped with the frightening image of a cyclist sliding down in my head. “Just start from the apron (the flat surface on the base of the track) and move on to the higher elevations gradually after each lap,” Chanel said to me from the top of the ramp, flying by at 40 miles an hour on her bike. “And don’t touch your brakes,” she yelled. Nervously, I clipped in on the pedals of my road bike and decided to stay on the apron.  However, as I gained speed, my bike started to lean towards the ground while bending along the track curves, and I found myself jumping over to the blue strip, the innermost, and the shallowest side of the banks. As I gained more speed, I would jump over to the steeper side. Soon I was riding in the same lane as Chanel along the highest elevation and steepest curves. “It’s all physics, you know,” said Chanel.

It was true, and the laws of physics are what kept me riding on the banks rather than playing out the collision I had imagined when first seeing the DLV. When we bike in a straight line the main forces involved are the gravitational pull by the earth, which is counteracted by the upward normal push by ground and the air resistance/friction that is overcome by pedaling to keep a balanced forward motion.

The physics of track cycling

Cycling on an angled surface or on a curved path is slightly more complex as it also requires an inward force towards the center of the curve to maintain the circular motion. This inward force is called the centripetal force.  A centripetal force is a force induced by a cyclist to continue moving at the same speed while taking a turn by tilting their body towards what would be the center point of the corner of the curved lane. In the absence of this force, the cyclist would end up in a straight line and then bump into a tree or a car. In other words, if a cyclist wants to make a turn at a high speed, they must lean more to create adequate centripetal force. Conversely, if they want to slowly turn the corner, they require less centripetal force and turn the corner without leaning much.

The centripetal force can also be experienced while taking a leisurely bike ride through the park. The faster you go, the more you have to lean to maintain speed. However, a bike can only bend so much towards the ground before the friction of the ground and gravity takes over and you lose control of the bike.  An inclined surface on the turns can help you with the lean. A velodrome is an example of such space with a closed-looped track and steep banks on each turn. These banks allow cyclists to lean towards the center of the track while maintaining their balance and staying perpendicular to the inclined surface. Given the design of the velodrome, a cyclist riding on its track is subjected to all of the physical forces previously mentioned: forward momentum, friction, gravitational pull, and centripetal pull. However, the shape and banking of the track make the relationship between these forces slightly more complex than your average ride in the park. Therefore, understanding and applying physics is crucial for professional and avid cyclists who enjoy a fast pace but want to stay safe. 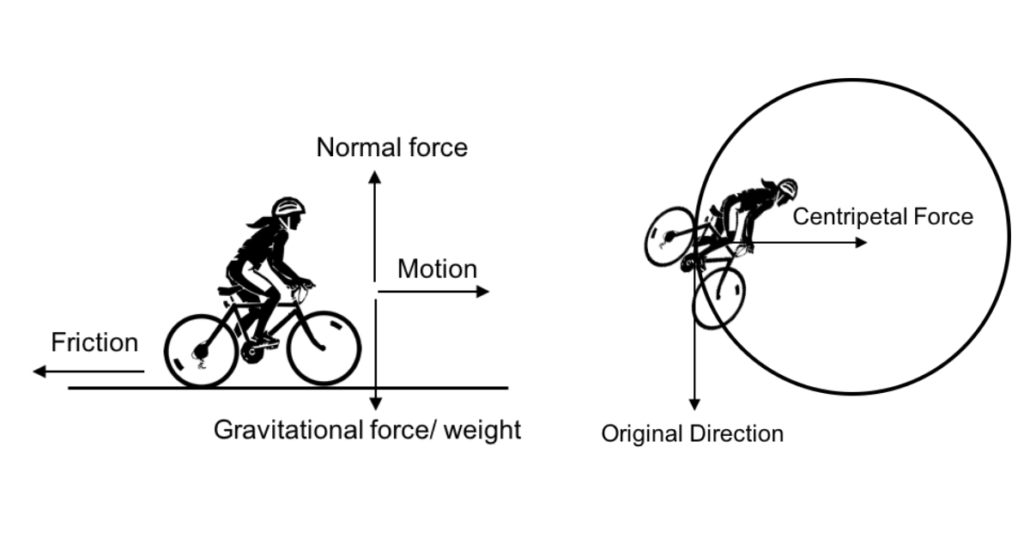 How to ride in a velodrome

To successfully ride in the velodrome, a cyclist’s speed must be directly proportional to the angle of the slope and the turn radius of the turn of the track. For DLV, a cyclist can stay on the track with a maximum speed of 55 miles an hour without falling off the track! To put that in perspective, the average speed for a relaxed ride through the park is about 8-10 mph or up to 15 mph on a well-maintained road. The maximum speed for experienced and extremely well-trained cyclists can reach up to 20-22 mph. Velodromes push these limits to the extreme with maximum speeds of nearly 60-70 miles per hour based on a velodrome’s shape and structure.

The velodrome has made track cycling so captivating it has become one of the most popular sports in the Olympics. It’s no wonder that the Atlanta locals who watched the sport in the Munich Olympics were determined to build a velodrome in their own community, which is still popular among Atlanta cyclists nearly half a century later.

Today, the Dicklane Velodrome is owned by the city of East Point and managed by a volunteer-based, non-profit organization called the East Point Velodrome Association (EPVA). I sat down with Peter Antonovich, the President, and Director of EPVA, to learn more about track cycling and DLV. Peter shares that the velodrome track provides a safe and open space for cycling without concerns of traffic, potholes, or unexpected curves.

“Track cycling could be intimidating at first but the more you practice, the more you get accustomed to it,” Peter says. Even when a prospective track cyclist understands how the laws of physics apply, they still need extensive training before they can race. The DLV provides certification classes on the weekends during the on-season, which starts in March and ends at the beginning of winter. A track certificate is mandatory to participate in the races. “Newcomers learn how to ride safely on the track through lessons taught by experienced volunteers,” Peter told me. The certification course at DLV costs $60, including the cost of a bike rental. Once you earn the certificate you can join the beginner class to train and race on Tuesday nights. The races are $15 to participate, and free for spectators.

Peter explained that the track bikes are somewhat different than the traditional road bikes. They don’t have brakes and are fixed gear. The only way to control the speed is by pedaling. “You use your legs to slow down and speed up,” Peter says. The idea of not being able to break could be frightening at first, but it is actually safer while you are on the track. You must have a minimum speed in order to keep exerting the centripetal force and moving on the curves, otherwise, gravity pulls you down the slope. “You brake, you fall,” Peter warns.

“Track races demand strategic planning and tactics from the cyclists,” Peter says, emphasizing the psychological skill as well as the rider’s ability to pedal fast. The DLV provides a safe and healthy competitive place for cycling enthusiasts to train both their physical and mental fitness. “It’s chess on wheels,” says Peter, smiling.

Whether you would like to put the science of cycling into action with a relaxed ride or with a new hobby of track cycling, understanding a few basic principles of physics will only improve your experience. If you are more inclined to the former, I recommend cycling on the Freedom Park Trail and taking notice of how the winding path will require you to slow down and/or tilt your body at each turn. You can always watch the track cycling races from the safety of the sidelines! If you’re set on trying out track cycling, you can feel fortunate to live so close to a velodrome and get involved with the Dicklane Velodrome.

Thank you to Peter Antonovich and the East Point Velodrome Association! To learn more about upcoming track cycling events and training, visit https://www.dicklanevelodrome.com.

Hispanic Heritage Month: CSOs on the GO!
Scroll to top